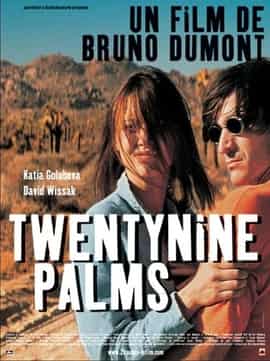 Plot – Spoilers:
A couple are in Twentynine Palms with the vague goal of scouting. David is some kind of photographer or filmmaker and Katia his girlfriend, perhaps a model or actress. The scouting takes a backseat as the couple meander through the desert-town doing nothing, sometimes fucking amongst the hot, sun-baked rocks.

Though they do pretty much nothing of significance until the finale, the couple is very watchable. Katia seems to be terribly depressed and is often triggered by the slightest. David meanwhile appears to be floating through the relationship, but has dark streaks paddling beneath. They have frequent bouts of sex where David comically grunts and squeals like he were the first and last man on earth. Anyway, the reason the couple are very watchable is because most of the time you don’t know what the fuck they’re doing together. They struggle to communicate with each other and often switch between English and French, and Katia even slips into Russian when stressed. But then other times, they seem perfectly fine together, comfortably indulging in meaningful nothings.

If these kinds of movies don’t do it for you, it’s probably worth sticking for the finale that is mostly unpredictable despite the looming sense of foreboding that Katia has throughout.

wow! was not expecting that! shit got dark real quick!

A couple of observations:

Albeit I did enjoy it, this movie was about three days longer then it needed to be…

See what happens when you slap on your girlfriend?

And finally, all you observant effed-up em-effers, see if you can spot the blooper.

This couple is so boring that even when we have suffered through the main part of the movie just to watch the final fifteen (which allow it to be included in the FU movies) all we can do is go: TF for that, and wish it had happened a lot sooner. One of those pretentious art nouveau movies that get shown at film festivals and all the ciritics go: how great (and incomprehensible) is that! All the same EUM thanks for posting.

And you will hate the CD that plays in the car…

This movie was REALLY bad, don’t even waste your time, it’s about a couple just driving around the desert and some sex scenes that weren`t even that good, no good story, no dialogues, it sucked!

Moral is if you cant take it up the fudge pipe don’t try giving it,
and don’t take it out on your girlfriend if it hurts… -10 out of 10 for effort, rather crap really!

At the advice of the comments. I’m glad I skipped to the last 20. Just another day in palm desert

Calls dog to side of moving car…. Gets pissed the dogs leg gets ran over….lolwut

This movie is missing 5 minutes the full version is supposed to be 1 hr 59 mins.

Wtf happened there in the end? Anyway… bottom line: don’t stick your dick in crazy… (although he wasn’t exactly stable either is seems)