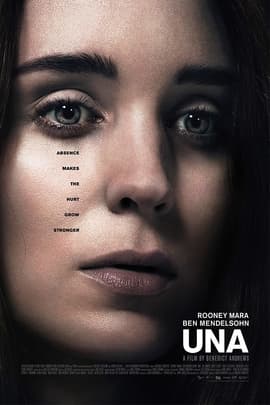 Plot – Spoilers:
28-year-old Una lives with her sickly mother. While their relationship appears strained and even on edge, Una is meekish in her mother’s presence and tries to spend as much time outside home as her guilt will allow her to.

She sees the photo of a much older man Ray in a magazine and this brings back memories from when she was 13-years-old and in a three-month-long abusive relationship with him.

Una decides to turn up at his factory floor where he’s now a manager under a new name and confront him about their past. Her questions and emotions are complex and they bit-by-bit construct the extent of her abuser’s role and influence.

This is vaguely based on a true story in the sense that the film’s origin lies in a play, which in turn was loosely inspired by convicted sex offender Toby Studebaker.

And if you order right now, we’ll take an additional 20% off this already FREE really twisted movie site!

Must be 18 years or older to participate .

Liked the story. Really hate that their relationship is still there. He took advantage of a very young, naive girl and she should know that by now. Doesn’t matter if he was “in love with her” or not.

Get over it grandma, both of them had had a good time till nosy people start to correct it.

So, do you flavor little boys, little girls, or both?

I’m guessing you’re an ass eater, so it probably doesn’t matter… as long as they’re young and tender.

You must be one of those sick pedos…this site with its entire movie fucked up movie collection is not nearly as fucked up and disturbing as the fact that people like you are out there ..

lol guys like you who are so staunchly against pedos are probably the real pedos, stop moralising you fuckheads

Says the eater of 8 year old ass…… Or do you prefer Daddy’s big, loose and hairy ass… Hmmmm?

‘ Guys like you who are staunchly against paedos’?..Errrm why AREN’T YOU???

And yet… here you are. Watching movies about molesting little girls and defending those who do so. I’m thinking if anyone here had a taste for children, it would be someone exactly like yourself. Or are you just pissed off that there are those of us who think people like you should be castrated?

Yep ..what a total oddball and so is the other one defending him !

Sooo edgy! Put your mom’s IPad down and go do your homework.

Sooo mundane… Clutch your iPhone a little tighter, Kate… and hope someone pays attention to you….

she wasn’t replying to you.

The mindset of a paedophile..saddo!

A sex offender gets out of a jail, he is allowed to change his name and despite the criminal background he becomes a floor manager? Is it a science fiction movie?

was that not your experience when you got out?

unbelievably well acted by the two main characters. It seems like he has learned his lesson, and all she needed is a true boyfriend in the end. A very descent effedup film courtesy of EUM.

Meh this ain’t it for me pretty drawn out and boring. 4/10

sick bastard the auld mon is. id be thanosin these kinds of people if ever ever see them irl

oh wow you’re so brave… so tough too

thanosin? Does anyone here speak Gibberish that can translate for me?

This confused me too for a while. I kept saying to myself ‘thanosin’? ‘Thanosin’? What the actual fuck is ‘thanosin’? Then I realised it’s a reference to the Avengers movies. And proof that some dumb kid wrote that comment.

Effed up subject, but it doesn’t show anything effed up.. there’s more old-young relationship in Stephen King’s Gerald’s Game than in this one

yep, I enjoyed that. I am a massive fan of Ben M anyways, and Roona can act, plus Riz never lets us down. Thanks again to one of the best movie sites online….HERE’S TO EUMs….hip hip…..hooreeey!!

agreed. i watched this solely for Ben. M and really enjoyed it. he’s able to make you wonder whether it really was a one-off, or he’s still molesting.

Talk talk talk but nothing happens. Next!!!

Clinquant performances from Rooney and Ben. I resonate consequentially with ‘Una’, having experienced such similarly myself whilst attending Melbourne Girls Grammar in my adolescent years. I have seen this coruscating film on a plethora of occasions, it never fails to convoke my melancholia and profound discomfiture… I was so young and jejune.