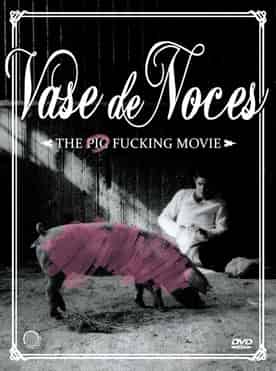 Plot – Spoilers:
A young Belgian farmer lives alone in a rundown church and its surrounding farmland with an assortment of animals including birds, ducks, chicken and most notably, a female pig. The farmer is either extremely lonely, or a little mental, as he is quite taken up by the beauty of the pig as she plays around in manure or struts around, pirouetting her plump ass. After several attempts, he manages to fuck her and she soon gives birth to three piglets who look nothing like him. His paternal instincts are in overdrive though, and he locks her up and attempts to bring the piglets up by himself.

The farmer has unique ways of dealing with his existence. For example, he blindfolds himself in an enclosed space and attempts to locate his love from among the other unattractive animals, just from her sound and by touch. He also deals with loss in a unique way – by brewing himself a kettle of shit-tea and binge-eating shit. A charming man indeed.

THANK YOU VERY MUCH 🙂

I’ve heard about this one, need to see this! Thanks brother!

If you can stand the religious music, and deal with the complete and utter inanity of a film about a seriously retarded individual, you might – just might – find a reason for watching it.

It would be great to see the making-of for this film. It is called Of Pigs and Men (2009). I can’t find it anywhere but it is apparently an interview with the actor in this.

Really boring movie, specially by the terrible music [I hate the “cluck cluck” song after the pig scene]. You can find the same “shock value” in Two Girls One Cup. Watch it if you like but be prepared to kept forwarding the long shots in each scene or better watch Cannibal Holocaust, at least the pace was better.

That ‘religious music,’ is by one of the great geniuses of all time, Claudio Monteverdi

I really have wanted to see this film for a long time but could never find it so thank you for posting! That being said, this movie is so fucking painfully boring and awful that I wished I was hung like one of the incest human/pig babies

nice movie but toolong, could made it 60 minutes and wouldbe amazing

Twelve minutes in, and this soundtrack slaps. I don’t know what some of ya’ll are talkin’ about with your trash.

Post-thought: Whilst I initially assumed I wouldn’t enjoy this movie, I was more interested throughout than anticipated. I’d have to say my favorite scene began when the two birds started mating to the point the camera goes to the man and his pig. To me, it summed up the whole premise of the movie. Behind human eyes, no matter how foreign it is to witness, two birds fucking was far more natural than this dude’s weird obsession with his pig. I couldn’t help, but hope during the viewing of this that the creators of this movie didn’t end up traumatizing the pig with the dude chasing it around/pretending (hopefully pretending…) to fuck it. Overall, if you’re into watching movies even just for a weird-ass time, I recommend this. The soundtrack is great, but some of the sound effects are disgusting.

not the cute baby pig fuck that crazy asshole

That pig was seriously cute. Better looking than some the girls I have dated, and it does not talk back, lol.

Perhaps, it does talks back, but not in a human language.

Hmmmmmmmm… Definitely of its time AND wayyy ahead of its time… Nicely shot.. interesting soundtrack… More depths of human misery and banality of existing.. doesn’t tell us much aside from ultimately we are all alone… And one can never have enough jars …….

It had to be Blegium another massive boring farm of old pedos and depressive people. fucking weird people what ever happened to the good values Europe traditionally had?

i see u
Reply to  Party floor

whatever you say muffles

muffles
Reply to  i see u

Party Floor is not me so your radar needs a bit of adjustment.
To help I normally post at this time (when I wake up) and in my evening. During my normal day I potter about doing other things. Today I will even spend a few hours working.
Also having worked my way through the list of films available there are only three on my watch list; seize the day, the pledge and excision. It would be wrong for me to reveiw a film that I have not resently watched even if I know it very well and many of the 700 films available I have seen multiple times before.
Plus I post anon so a pic will never appear beside my postings. It is polite to stick to one identity so people can form an opinion of the poster and view their comments accordingly.

i see u
Reply to  muffles

Oh man, I wished the chirping of the bird, ducks and chicken had subtitles. It feels like they’re bitching about the weird man who has a thing with the pig. lmao. (Most scenes are so boring because there’s no dialogue. There’s a BGM, but I still find it monotonous. So if you look away, you might miss a thing in the movie.)

I agree with other commenters that the piglets are so cute. So, were they actually killed during the film? Most probably.

However, making the mother pig sees the corpses of her children was probably the most-fucked up scene because it was included as a scene in this movie (regardless if these piglets have been actually killed or not). The most chilling part was that her extremely shocked reaction towards her “dead” children is seen as entertainment for the makers of this film. Supposed that this was done to a human like playing a prank on someone else’s parents and making props of their “dead” child for them to see isn’t really something a decent human would do.

Bestiality in this film is probably more horrific for the people during their time because it wasn’t commonly “filmed” unlike today since you can watch porn of this kind of sex online. Also, impregnating a female pig with a human male semen to fertilize piglets in its womb is impossible (at least for now). They’re not even in the same taxonomic species, which simply means they had too much difference in their genes and are not compatible to form an offspring (piglet). But, I guess, since Google was yet to be invented at that time, average people won’t even know about this and are likely to believe the successful impregnation by the man to the female pig in this film. So, how many men with this fetish, at that time, expected that a child of theirs would be born from bestiality?

Actually, the early scenes of the man molesting the pig’s boobs strikes me as something sexy until everything about the zoophilia thing went downhill. After caressing scenes, the director and script writer entirely focused on sex which is a let down. There’s not much more scene of “intimate” interaction between them as “lovers” or as “husband and wife”. After having a family, his love for his pig wife and their children became lackluster in the movie. A pity.

Another thing, as the man seems to be the only person in that place, this means that he had raised these animals alone (or maybe not, but why was he left alone there? Cannibalism? Love for the pig is stronger than his love for humans? Omggggg). So, why on earth was he incapable of taking care of the three little piglets and their mother? Having a lust can’t make someone so dumb that he would forget how to do this basic thing.

I wonder how legit are the scats in the film though. If those are real, it’s amazing how the entire movie crew survive those poop scents during the filming (especially those without the scat fetishes). His vomiting was also real but I’m not sure if it was the poop that he was vomiting out or other stuff that are part of their props to induce vomiting.

I’m not sure if I was already desensitized, but do the others agree that this is really a tier 6 iceberg film (based on some Reddit thread)?