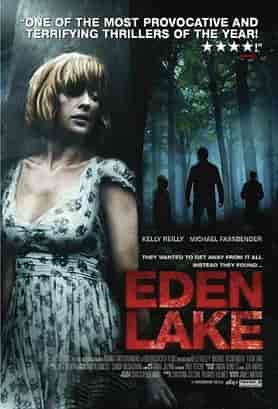 Plot – Spoilers:
Steve takes his girlfriend Jenny for a weekend getaway to a lake, deep in the English woods. The place is soon to be converted into a gated community and Steve figures it’s the best place to propose to her, away from humanity and all.

Jenny on her part isn’t that impressed with the idea of going to what was once an abandoned quarry. Her tacit disapproval sends Steve into a tizzy trying to impress and assert his masculinity in a countryside town where the folk are rough and contemptuous of his city ways.

Just when the romantic couple finally begin to enjoy the remote lake, a gang of teenagers turn up and turn on asshole mode. Steve who’s been feeling emasculated for a while decides to take them on, while Jenny – who works with kids in her day job – is part amused and part nervous.

Great movie thanks for this service

Love this movie! Been years since I’ve seen it. I’m gonna give this another watch cause you found it worthy to put on effedupmovies. Thank You

Kelly is so [email protected]#king hot

great movie，watched this when i was 13

Good movie but they stopped the story before the whole of Scotland yard caught up with this lot and proved what happened and locked them all up. They left enough clues and loose ends to sink them all. I guess that will be the sequel, ‘Justice For Eden Lake’ Hope they all burn, the scum.

This is one of the first ‘shocking’ movies I ever saw and it’s always stuck with me, nice upload

This freaked me out when I first saw it and it still hits me spot on a rewatch
Great set up before it goes all out twisted f*ckery, and that ending is just a masterpiece.

Finally, a movie without a happy ending. Top Notch !!!

One of my introductory movies to effedup genre and has stayed with me ever since. Must watch ..! Thank you admin 🙂

Ugh, I really wanted to love this. It always sucks to hear great things about a film and then be sorely disappointed. So many people like this! Crazy. It really does have some decent intense moments and damn fine acting. But as someone mentioned in the above comments, it’s so fucking unbelievable. 30 mins in I was already fidgety and keeping a mental list of all the shit that happened that never, ever would happen in real life. It is important to suspend reality a bit when watching horror, but I find that works best with supernatural, monster, devil, etc type films. This one is based in reality and could have been a hell of a lot better if they didn’t try to make it so artsy cute with all the overly coincidental BS. Still, a worth while watch for the acting and DEATH! Lol Thanks EUM, Cheers!

Great movie! The british can do it as well as the Yanks and better with this one. Reminded me a bit of Last House on the Left, but I enjoyed this one more. Ending was a bit unexpected but sometimes the bad guys win. Dont know if there is a sequel but I hope there is.

It has it’s place on the site.. certainly overrated though.

It was frustrating because the man and especially the woman protagonists were so passive. All of this could have been avoided if they didn’t keep letting the kids off so easily. Like at the camp, after killing that stupid dog the man should have killed Brett while he was mourning and distracted, then killed all of the other kids who didn’t run away

Instead they made themselves to be easy targets because they weren’t willing to fight back. And that stupid woman who kept saying “just leave it”, like this is why fuckers like them get away with things. Because no one wants to do what’s necessary. At the very least, they should have not gone back to the beach after they realized those kids were there

you know, you’re rooting for her and then…damn, so close. ruthless ending.

No happy ending yay
Or was it….

What a truly gritty story through and through, and all would’ve been avoided if Steve simply listened to Jenny, packed their stuff and moved elsewhere to avoid the troublemakers. Good show of character foundation in Steve to try and stand his ground at first probably already knowing that it won’t end well, but it’s such a shame it didn’t pay off well either, otherwise he would’ve walked away learning a lesson that it was not a good idea to go against a gang of troublemakers that easily outnumbers him, especially when his goal was to have peace with his wife in a remote setting. Then we have Jenny who didn’t want any trouble at first but eventually turns into a ruthless killer just to survive, and just as anyone would likely think that she’d make it…

Great movie! I love Kelly Reilly such a great actor.