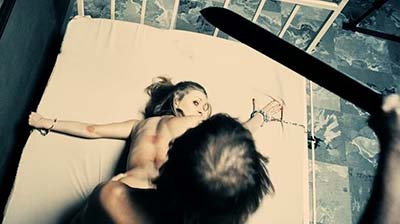 A Serbian Film has been ripped apart by a sizable section as rubbish, but our view here is that this is one of the true masterpieces of the modern era when it comes to effed up movies. The Director seems like someone who hung around imageboards and onion sites and decided to put together a collection of the worst he had seen. What makes A Serbian Film stand out compared to many other movies in the genre is the acting and the levels of depravity which all seem believable.

This movie is overrated just shock value over quality like it’s just too over the top to be disturbing and it just becomes annoying like we get it society sucks and you have some cool gore effects it would’ve been more disturbing if it focused on story rather than shock
Value. To be fair I would’ve found this more disturbing but however I have seen much worse in real life because I was horrifically abused as a child so movie stuff doesn’t phase me but come on guys is this really the most disturbing movie you can think of come on you can do better than that.

Damn this is where od left the session

Decent movie. When you listen to the director describe the purpose of all the violence it views differently than just a “shocking” movie.

Im only commenting because this film gave me nightmares and made me cry during watching it while wanting to throw up but i got morbid curiousity to blame for that but the film is also realistic proof how fucked up people can be and human denegrasity knows no limits.. this movie deservers a new level of viewer discretion is advised.

I’m 16. I watched this and felt nothing. I feel genuinely gross for how far I’ve gone and how desensitized I am. Does anyone have any tips? I need help. I enjoy the fuck-you to the Serbian censorship and the light to the bastardization of the porn industry but that’s not why I watched it. I just want gore. I want blood. I want rape. I don’t enjoy it but I can’t stop. It doesn’t turn me on or anything I just can’t look away. I’m going to therapy soon but I don’t think I’ll tell them about my shock film obsession. I want to try and get over this on my own first. I might continue when I’m older but I’ve been watching shit like this since I was 13 and I don’t think it’s good for me.

It’s always the same old shitkickers on here estranging people for having a fucking opinion 🙂 The like/dislike feature is futile, they’re all mediocre mendicants anyway.

The people in this comments section need their souls fucking rescuing, holy shit

I have hesitated to watch this movie for a long time because I thought it would be slow and boring AF. I finally decided to see it a couple of hours ago. This was pretty well made, well written, well-acted, and pretty damn disturbing. Probably the most disturbing movie I have seen in a long time, and I have seen a lot of disturbing movies but horribly written as hell. This one is definitely a memorable one I can easily recommend to friends who would want to check out a disturbing flick over garbage “woke” Hollywood propaganda movies. Good on you EffedupMovies for having such classics.

god this reaally is fucked… i feel sad after watching..

For some reason I’m just not phased by this but maybe it’s just the fact that I realize this is just a movie and not real. I will say this if this was like a real life documentary it would be absolutely horrific and I would probably be disturbed ( it would also be illegal if this was in real life considering the amount of CSA that goes on here). What disturbs me is knowing stuff like this happens in real life. Tl;dr it’s only disturbing if your disturbed by special effects and acting ( which is fine) but it wouldn’t disturb you if only get disturbed by real life footage. Also this comment section is sicker than the movie itself people getting bashed for having an opinion idc what your opinion is about my comment, it’s my opinion and it’s my right to express it so got complain to someone that gives a shit because I don’t.

FUCK YOU
KILL YOURSELF

Why do people like this movie the acting is so trash the special effects are pretty good but I guess art is a subjective thing too me it doesn’t really do anything because no one of it actually happened in real however men behind the sun is a lot worse due to the fact that happened in real life the movies about stuff that happened in real life are very horrific. The only part the disturbs me about the movie is knowing that their are actually people this cruel in real life the world is such a cruel place sometimes some people just don’t deserve to live honestly it’s a fucked up world but alas we must suck it up and keep going with our lives. You can dislike this comment or like it but just be respectful if your gonna disagree with me I want to hear your opinion if you think differently about this movie than I do I know it’s art either every movie ever made is art, I just found this movie silly but maybe it was because of the acting if it had better acting I think it would be a great movie for those with a strong stomach like me. I wasn’t completely unphased by this movie though the genital manipulation scenes especially the scenes of him urinating blood where pretty vile I will say that reminds me of when I had kidney cancer and it spread to other parts of my body that caused me to urinate and vomit blood cured from it now but it was disgusting, tl:dr this movie wasn’t that disturbing too me because it isn’t based on real life events men behind the sun is a horrific movie based on events that actually happened in real life, through I wasn’t completely unphased by the movie the genital mutilation scenes where nasty especially the scene where he urinates blood that made my dick hurt. If you disagree with me please keep it civil I don’t mean to offend anyone this is just my opinion if you disagree do so respectfully that’s not too much to ask is it?

It was fine, but definitely not even close to being as hard as suggested… I mean, there is barely any gore, only one remarkable scene that happens fast, and everything else isn’t explicitly gore-ish, happens off-camera or involves a really fake plastic doll or plastic penis lol

The Serbian fucks everything that has 2 legs and a hole between, even his own family LOL

Kinda boring tbh, just violence for the sake of violence without any coherent plot.

The people commenting here are far more disturbing than the film itself. It’s just a stupid movie. Stop being fucking shitty to each other