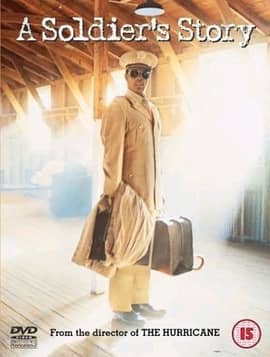 Plot – Spoilers:
In WW2 Louisiana during the time of segregation in the US Army, a black sergeant, Waters, is murdered and the Klan suspected by his company of soldiers.

Captain Davenport, a rare black officer is sent in from DC to investigate, but his arrival brings discomfort. The black soldiers are proud to have an officer of their color, but are also unsure how to deal with him. And the whites are shocked and wary that his determined probe might disrupt the uneasy racial balance and calm that exists in town.

But as Davenport starts digging around, he uncovers facets to the murdered Sgt. Waters that complicate the case. It turns out Waters wasn’t particularly popular among his soldiers for what they perceived to be, desperate attempts at whitening himself.

A Soldier’s Story features Denzel Washington in just his second film role. But personally speaking, Art Evans as Wilkie is the showstealer. He brings a tragicomic element to Wilkie that borders at times on the hilarious.

boring as all hell

Why is this movie here.

If you want, I can sed you guys some movies. Do you have any of Philippe Grandrie’s movies? I have a couple of them I could send you if you want them.