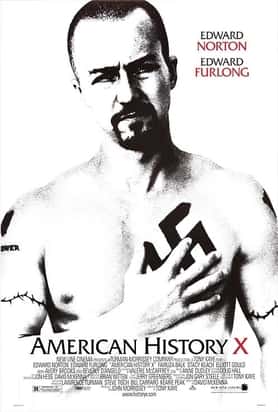 Plot – Spoilers:
Loosely based on the life of former skinhead Frank Meeink, American History X set in Venice Beach follows Derek and his younger brother Danny as they plunge into Neo-Nazism as a counter to the take-over of their town by other races.

Derek and Danny are smart kids at school but Derek loses his focus in literature after his firefighter dad is shot dead by black drug dealers while on duty. He becomes the protege of Cameron, an older white-supremacist, and creates an organized Neo-Nazi gang that intimidates gangs and people of other colour.

One night, a black gang attempts to break into Derek’s car and he shoots one of them before willfully splitting another’s head on the pavement. For this he gets 3 years jail-time and his time away sees younger brother Danny follow in his wake. Prison also doesn’t go according to Derek’s expectations and beliefs.

Edward Norton as always is fantastic while Edward Furlong reminds us why the Terminator kid was such a fine prospect.

Most skillfullt crafted, superbly written and Oscar worthy acted WHITE GUILT PROPAGANDA FILM TO HAVE EVER BEEN BIRTHED FROM THE LOINS OF HOKEYWOOD’S CLICHÉ, ULTRA LEFT NARRATIVE! It’s sold most of it’s viewers so well on it’s distortions, half truths and outright intellectual honesty so well that if Goebbels were alive today, it would make his lying, propaganda spewing ass blush with envy! A gut wrenching movie if you appraise unbiased truth over narratives ppl allow themselves to be mired in. Just too damn good to hate and that is what makes it downright dangerous. Lastly, on a personal note, I have had the grave mispleasure of being locked up and it is true that boots and AB’s don’t like each other. If Frank Meeink was hurt by Ab assholes, I’m sorry. But none of those guys are any kind of a close not family anyway. Regular Woods like I was, Skins, and Abs generally tend to avoid one another anyway. A fact I hope that none of you who have never lost your freedom ever become intimately acquainted with!

*Intellectual dishonesty was what I meant to say…lol

wow, what a fucked up ending

MR BRIMSTONE… I agree with you. I think the movie is BS and the characters almost one dimensional.

one of the best movies of all times for sure.

Haven’t watched this movie in years, what a great come back

Love this movie so much! Hatred never wins.

Lmao, this movie is so fucking bad. Nothing prepared me for the sheer stupidity of the basketball scene. That said: despite all its hand-wringing, this movie does way more work to make Nazis look cool and relatable and awesome than any living Nazi ever did. Nazis wish they could dunk but they can’t cuz they’re too boring to live. That’s why they’re dying out.

A decent movie. Gets a bit Driving Miss Daisy-esque at some moments and kinda paints skinheads as a whole in a bad light but overall one of the best representations of far right radicalization I’ve seen come out of Hollywood. Everyone should watch at least once yet this might be one of the few good movies I’d rather not see a second time 4.5/5

Wow pretty good movie and the ending is worth the long story listening I thought it was funny to imagine when he is sharring his prison story for like a good 30 mins I Was watching thinking… “Jeez they must of been talking about this for days..” I really expected them to end the prison story and go back to the brothers but on a different time of day and place XD but it looks like they just sat in same spot no later or nothing XD If they were to ever allow gore movies to be shown in school I think this would be a really good movie for school kids to watch to show them how stupid gang fighting can get when politics get involved and ussually always does.