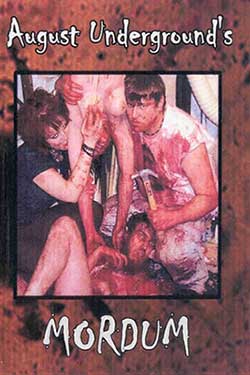 Plot – Spoilers:
In this second part to the August Underground series, Peter (Fred Vogel) is joined by his girlfriend Crusty and her brother Maggot to amp up the depravity.

August Underground’s Mordum apparently started off as a music video for the band Necrophagia (Vocalist Killjoy plays the serial killer whom the trio hang out with towards the end of the film). At that point, it was Maggot (Michael Todd Schneider) in charge of putting together footage. What he had was later edited and more footage shot and added to become what we now know as August Underground Mordum. A different version called the Maggot Cut exists.

The movie kicks off with a similar trope to the first part – the camera following someone climbing up the stairs – and your heart sinks a little because Part 1 got your expectations soaring and you wonder if it’s just more of the same. As it turns out, the cameraman has just walked in on his girlfriend fucking her brother. A squabble ensues between the two and she finally assuages him by cutting her belly. What a wonderful way to get your spirits back up ….

It gets even better and a little ironic when they travel to a junkie friend’s place, butcher the comatose guys there and cough and sputter about how disgusting the junkies are, to live in the filth and puke that they do. And their biggest concern while dismembering the bodies is to not catch AIDS.

Peter and Maggot share an uneasy relationship because of the incest thing with Crusty. For the most part, Maggot is submissive to Peter and appears to be deranged and someone who truly lives in his own world. It is therefore not surprising that Maggot often is at the centre of the worst scenes in the film. Some of the depravity on show here includes:

Forcing a half-dead guy to chop his own dick following which Crusty sucks on it for a while before rubbing it on his girlfriend’s pussy.

Crusty puking on the faces of two girls while Peter jerks off.

Gutting a woman and Maggot later fucking the gash with the innards spilling out.

Maggot eating maggots from the rotting corpse of a decapitated child.

Maggot violating the corpse of a young girl while Crusty strokes the girl’s cheeks and utters the chilling words, “You’re not gonna have to worry about growing up now sweetie.” 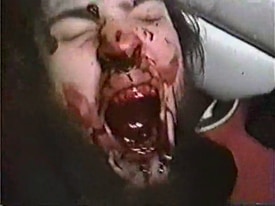 are you sure this is not a genuine snuff film? Way too realistic. So what is wrong with the people who made this thing?

Lmao are you fucking retarded?

It was ok. Not really all that shocking. I’m desensitized as hell though.

Extremely boring,what a shitload of crap !!

Okay I just finished this hour and fifteen minute shitshow (excuse my French) and I have honestly never watched something so objectively bad. I, personally, do not partake in such activities as “anally raping the corpse of a young girl”, or “[f]orcing a half-dead guy to chop his own dick”, and even “puking on the faces of two girls while Peter [an accomplice] jerks off”.

Honestly, there are almost 0 redeeming qualities of this movie however my colleague and I (who have extensive backgrounds in film history and analysis) were able to agree on one such quality which was the succinct yet subtle character development seen especially in the character profile of Maggot who goes from, “eating maggots from the rotting corpse of a decapitated child,” to (as mentioned prior) “anally raping the corpse of a young girl”.

Although there are very few themes I can think of, one does call out to me – beckoning to be foretold to the other members of this site. And this theme is of desperation. This theme is not called, but caterwauled out as almost a self-confliction in its own existence. I would like to now bring forth an example from George Orwell’s 1984 in which Winston Smith (the protagonist) – a man who’s perception of his own image is blurred by the very universe that created it – shows his complete and utter absolute despair in finding such romance. In one particular scene, Winston finds himself about to partake in an act extramarital intercourse with an older woman and despite her grotesque, abominable appearance, he, “But I went ahead and did it just the same” (Orwell 18).

This theme I feel many would be able to relate to yet unfortunately August Underground’s Mordum does not quite hit the hammer on the head of the nail that is this theme (the same way in which someone was murdered in the respective film).

Now this one is my most favorite out of the 3. I love the brother in this one and he was just wild and crazy and wicked . I love the whole movie but I definitely like to watch it more just to see maggot. He is hot !!!!!

honestly not a bad movie i guess, but I really don’t like movies that are shocking just to be shocking (and this is definitely one of those). personally I think part of the horror is simply seeing a build up and psychological reason that justifies the behavior in the characters head.
if you want a gorey horrifying movie I would recommend “Aftermath”. it’s not nearly as time consuming, way more thought provoking, and just a better movie in every way

Underground horror movie depicts a child being raped in pretty much full-blown detail. Nobody cares.

Netflix release a movie about girls who like to dance and everyone calls them pedos. The internet is RETARDED.

GREAT FILM FOR THE WHOLE FAMILY!!! 10/10 WOULD RECOMMEND TO YOUR LOCAL CHURCH

utter boredom
you cant see anything
and this is the best of the 3?
u r joking
0 out of 100

these are weird fucking movies.

they’re so frustrating? i find them really boring because there’s just this knowledge going into the august underground movies that they’re made to be like, super fucked up on purpose. and that’s achieved! i’m appropriately disgusted by the scene where crusty’s sucking on the disembodied dick. like that’s gnarly! i’m gonna sit through these because i’m genuinely just curious about them but after a certain point, it feels like ‘fucked up on purpose’ can only get movies so far.

maybe introduce a wide shot like, once or twice, but found footage yadda yadda this lady’s gettin’ her innards fucked so i better zone back in

I think the idea of having these movies filmed on a cam made it have that “disturbing” feel, but also a little hard to follow. Some parts were predictable, dragged on and a little over the top. The scene with the girls and crusty vomiting on them I found boring and skipped through. Maggot was definitely the fav of the film, crusty and her boyfriend were super annoying. All in all wouldn’t watch again, would maybe recommend to people who can stomach this genre, will broadcast on Christmas morning while family opens presents. Xoxo ?

This movie is sometimes a guilty pleasure if only because the graphic gore and shock value is much higher than the first film, but it is also objectively worse in every other aspect.

They completely destroyed the believability of this because everyone was acting like a ridiculous caricature of cartoonish personalities, basically what children would think of if they were asked “how bad guys act.” This is especially evident in the scene where the other serial killer that the trio hung out with earlier kidnapped a woman and said, “I’m gonna keep you to myself. You’re all mine!!” I understand that these movies are meant to be ridiculous, but this just took the ridiculousness too far in an unintentionally comical way, but to be honest it was trying so hard to be super edgy that even that was pure cringe.

its only a tier4 of 8 tiers of fucked up category. half way down the iceberg if u know what i mean.

this shit made me puke but i enjoyed the movie tho, seemed like a pretty convincing snuff film <3

Fucking beautiful film and what horror should be. Beautifully done.

instead of getting mad at her for fucking her brother he should have asked if he could join in.

In your Momms phat P

the times when propably the HD camera did not exist XD the resolution is so shitty it makes it so damn lame XD the movie is so cool for hided killers like me but the quality is Fucking driving me insane 🙁 arrrgghhhh!!!!!

In your Momms phat P

man this snuff movie is the real deal this movie should be remaked in better quality for the video picture. Seriously Developers make A Remake i Beg you! 🙂

If you have not seen “Maggots Cut” of this movie, you have not lived. I’ve had people tap out. Hard as fuck to find.. But I ended up finding it somewhere.

That stupid cunt ruined the whole movie,with her annoying screaming.Should’ve killed her off.
Does anybody think the same??

Nothing unexpected everything is disgusting like the director intended didn’t quite understand the point of this movie.. everything is way too personal and up close most of the torture scenes are confusing. I didn’t really understand what’s most of torture, rape, necrophilia they we’re all mishmashed like almost stitched together completely desensitized me because of the confusion. No plot… these people had fun making this movie, that’s kinda disturbing

Anyone bitching about this movie is clearly failing to appreciate the fact that this movie has HANDS DOWN the best gore effects of any movie ever made, completely blows out the entire history of multi-bajillion dollar Hollywood’s attempts.

this movie got me fucked up for days bro

This is pretty much the same as the fusrt part but with more characters on the spotligth. Of course they are annoying but the movie relies on being gross and dissgusting. Somehow reminds me of the time a friend introduced me to grindcore metal, this movie would fit a music video very well.

I enjoyed the first August Underground Movie, but this one was inferior in every way.

Acting: terrible. I really liked the chemistry between Peter and the cameraman in the first film. The banter between the two was what made it feel somewhat authentic (which is probably the main goal of this style of filmmaking). In this film, they just scream at each other and don’t really exude any personality. Maggot and Crusty really drag the film down and should not have been included.

Camerawork: Awful. Camerawork in this genre is supposed to look amateurish/unprofessional in order to contribute to the overall “found footage” aesthetic, and the first film did this well. However, Mordum misunderstands the difference between “unprofessional” and “unwatchable.” The camera shakes so much as to be dizzying and is so unfocused as to preclude any opportunity for the film to redeem itself with decent visuals.

Unfortunately, however, the visuals in this film are just as bad as its other aspects. The effects utilized during the torture scenese (i.e. the primary purpose of this sort of film) are mediocre at best (the penectomy scene was hopelessly unrealistic) and the choreography (such as when Peter is clubbing the junky with a hammer) is laughable at times.

Overall, I would classify this as a major disappointment. 2/5 stars

Hi everyone, new guy is here… yes yes yes new guy for slaghter and all that shit… but i can say i appreciate emotions, in first movie the weren’t so high, but in this it was really beautiful. any simmilar movies to reccomend? greetings from Easterrn europe 😀

this was unnecessarily hilarious