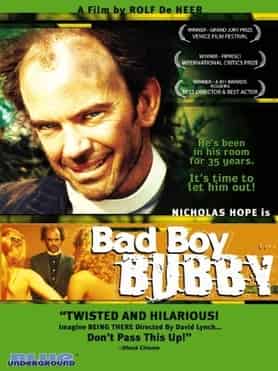 Plot – Spoilers:
A 35 year-old man Bubby has lived in captivity all his life in his mother’s dirty apartment. He believes the outside world is a cauldron of poisonous gases from which he’s being kept safe. His mother fucks him every night and also abuses him for things like not “being still” or wetting himself.

Bubby spends the days tormenting cockroaches and his cat, crawling about like an animal, and looks forward every night to being “Good Bubby” with his mother – a sign and reward from her that the day was obediently well-spent.

A change arrives in their lives when Bubby’s father, a fraud preacher, turns up. This gives Mother something else to turn her attention to, and Bubby finds himself rejected and confused. His life has made him mildly retarded and he hasn’t been allowed to develop a personality or express thoughts. So what he has become good at, is copying other people’s mannerisms and words, which turns out handy when he finally steps out into the world.