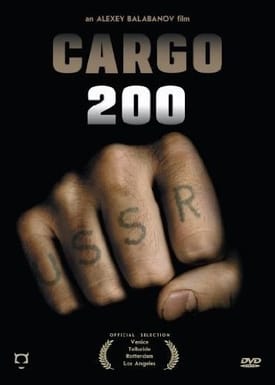 Plot – Spoilers:
Set in early ’80s Soviet Union, Cargo 200 claims to be be based on a true story though interviews with the director Balabanov suggest it’s more an amalgam of several events and his personal experiences while in the Army.

A Professor of Atheism on his way to visit his mother stops at a remote house in the country for help, when his car breaks down. The farm owner is a moonshiner living with his wife and a Vietnamese-Russian servant. There’s also a strangely silent man whom the rest avoid. After getting his car fixed the prof leaves, but the farmhouse remains the focal point when a young couple turn up there looking for booze. The couple include Valery, the fiance of the Professor’s niece and her friend Angelika – who’ve been secretly having a night-out of their own. The farm owner is known to Valery and as the booze flows, Valery soon passes out. And that’s when Angelika’s nightmare begins.

Cargo 200 is powerfully brutal without having to rely on explicit content. And most of this is down to the actors. It’s a shock to learn that the old woman playing the Captain’s mother was an amateur living in the apartment where they were shooting.

Sad but powerful movie…definitely in the effed up category.

Gosh I love this movie, it was sort of dark comedy. Business as usual for Russians.

Such a sad place to live…

It calls Russia, and that’s why everyone is drunk.

Pretty messed up. No wonder nobody trusts the cops there, when corruption is so rampant. I laughed every time that music started playing when the camera focused on the Professor. This movie had it’s moments and I find it creepy that this would even happen to a teenage girl among servicemen, but then that’s what you get when you have a communist Government!

Such a dank & dreary depiction of Russian life in the 80’s. Good movie, great acting, well done. Thanks again Effedup