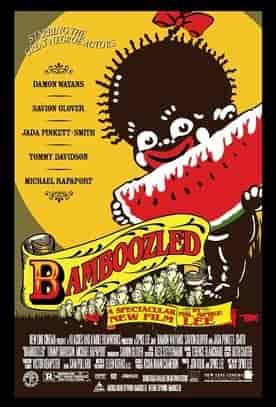 Plot – Spoilers:
A black writer for a network, Pierre is in the middle of a personal crisis. On the one hand, at the cost of getting fired, he feels driven to prove the racism in media by creating a controversial show. On the other hand, he looks at his comedian father whom he considers a failure and doesn’t want to end up like.

With his white network boss breathing down his neck, Pierre harks back to the era of blackface and minstrel shows and creates a pilot that goes viral, swallowing in its juggernaut, most of those involved with it.

Classic effing effed Up movie. One of the best on site, if not The Best.

This movie is incredible. I remember when I bought I was so excited to watch another Damon Wayans movie. I was looking to get my Major Payne on. Boy, was I shocked. This movie is incredible. It may be Effedup, but it’s beautiful and incredibly sad. The acting in this movie should have won multiple awards, but just like the characters in this movie, they were seen as just goofy characters in a satire, that only black people would “understand”, which is bullshit!

dude. this site is amazing. thank you

omg the most lame movie ive sn on eum’s, 20mins in nearly put me to sleep and its only 11am yawn asf….sry 1/10 feels generous…ps im white maybe the wrong demographic when this visual anesetic was created…

This is by far the most effed up thing i’ve seen on this, watched serbian film, human centipede 2 and Martyrs just before, and this is the only movie I really want to pause.
I’m litterally feeling bad and extremely gross by watching it, this is Racism to the max, i think the snuff tag is only there so you can find it more easily….

It’s not a Horror movie but it gives me pretty much the exact same creepy, uneasy and eerie feeling even thought it’s a “Satire Comedy” whatever.

I thin this is beacause the material is SO unexplored, they had a good way to show the (exaggerated) view of how black people had to live as slaves, but then TOTALLY NOT SAY SOMETHING ABOUT IT.

I’m speechles, I really think that this is much more effed up then, say, the torturing in martyrs, the brutality in frontier(s), guinea pig and what not. What the fuck this director….

It’s obvious that Spike Lee is very upset about whole slavery thing and angry about history of his people and also he is incredibly racist towards white population. It’s all cool but one thing that I don’t understand is how he make remarkable movies such as Malcolm X or 25 hour and then he creates unbelievably long boring garbages like Bamboozled or da 5 bloods?

I think it’s a reaally good satire, so it’s not a bad movie, even though it can be nauseating at times. But yeah, of course it’s completely exaggerated which is the point of a satire.
I think it’s even an achievement to make such an effed up movie in this “comedic” way, it mocks other movies that use stereotypical comedy like that and shows how effed up that is.

Jawdropping film, didn’t come here to watch it but I’m really glad I did wow

if i could give it 6 stars i would….this real world effed up hit different than all the gore shit i like

Racism?? Thats what yall are claiming this is so disturbing for? Jesus who gives a fuck,who cares about fuckin racism utter boring shit

& Spike Lee is a cunt,fuck him

Entertaining but not effed up.

Careful your guilt is showing☺️

Bad ending. They resorted to vulgarities where previously they had been able to converse in English. Just like listening to functionally illiterate white people, f this and f that and f’ed up. There are words to express shades of emotion and meaning, but the script writer would have to know those words or at least take the time to thumb through a Thesaurus.

Who cares about stoopid fuckin niggers,hope them & the fags & trans all get cancer in their assholes