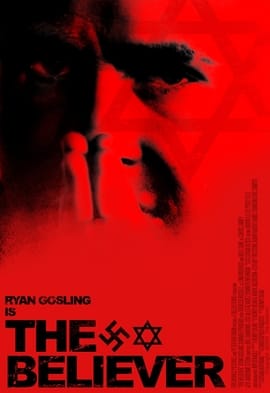 Plot – Spoilers:
A neo-Nazi, Daniel despises Jews which is a bit strange considering he is of Jewish heritage. He has other dichotomies too, such as being reverential while handling the Torah during times when he can’t wait to kill a few Jews. All of this turmoil is quite brilliantly captured by Ryan Gosling as he simmers in pain and torment.

Based on the life of Dan Burros, a Jewish-American neo-Nazi.

I can’t wait to re-watch this. I saw it when it came out. And it’s easily the most memorable film from my late teens. Just the thought of a Jewish nazi is wild.

The leader of the American Nazi movement, Dan Burros, was Jewish. They infiltrate the opposition to try to lead it away from any useful work. In the same way Jewish capitalist Jacobb Schiff gave the 1917 Jewish Bolsheviks $20 million.

to tell an infiltrate it´s usually the nose (big noses and baldness) like arabs. in photos Dan burros looks more like some fat and depressed virgin kid, either way I feel for him, is your name Dan because you cherish him or something?

Damn you gosling you tear jerker

I disagree. reality is beautiful once you let the true free you, only the damned suffer

“despises Jews which is a bit strange considering he is of Jewish heritage” lol Jews in a nutshell, they where even worst to other jews than nazis in Auschwitz. A culture so depraved and hated they even hate their own

Straight up. It was Jews turning in other Jews knowing full well what would happen to them. Fast forward and they still run the most degenerate aspects of society to this day. Promoting abortion and faggotry all throughout western culture while funding the worst of the worst. George Soros himself had a personal hand in rounding up and killing other Jews when he was a child.

Abortion has saved many a women from a rape baby and essentially if catholics had been a bit more wide in their interpretation of the onan story then the trojans would have prevented quite a few more.
As for faggotry, historically it was quite normal for men without female company to indulge themselves. Pirates, people in the forces, roaming homeless and samurai wariors all were happy to poke what crevices were available to them.
Your history seems to come from the ministry of information so expect it to change depending on the climate.

so, the worst thing that can happen to a jew is another jew they have lost their ancient values or maybe never really had them

a new favorite wow I felt for Danny the jewish sickness comes not from the blood but from the distrubed abrahamic philosophy that leads to selfishness and then nothingness (13) swastika number, plus I learned kike and more from nazi culture lol

plus the ending is crushing, so fucking distubring I don´t know people here realize how fucked up the ending was

Actually, dude being a half Jewish Anti-Semite is not so unusual. Some of the most antisemitic people in the world are jews. Same goes for the coloreds (and you have not even seen internal bias within a community until you have seen how gays talk about each other!)