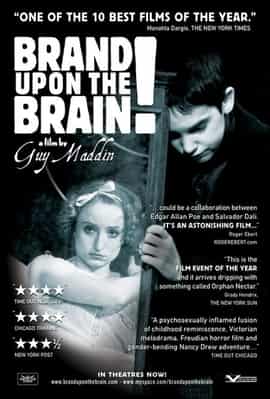 Plot – Spoilers:
On a bleak island somewhere, Father and Mother live with their kids – Guy and Sis – and a whole bunch of orphaned children. The island has a lighthouse which Mother uses like a torch to shine a keen watch on errant kids. Then a detective Wendy appears on the island to investigate strange holes that have been drilled into the backs of the children’s necks.

But this isn’t a film based on some teen-detective novel with fantasy themes and evil grownups. It’s rather the surreal memories of Guy as he revisits the island decades later, following a childhood of abuse. There’s also Wendy who crossdresses into her twin brother to seduce Guy’s sister, old age that lusts for and harvests youth, and above all, a lost love that Guy still pines for, years later, set to mesmerizing music.

If you’re not in the mood for the surreal, you will probably be bored by Brand Upon The Brain and throw it a 1-star rating. But if the mood’s right, this can be one of your more rewarding experiences on here.

WARNING this film made me sick all the flashing lights this isnt a movie its a projector slideshow that of which was used back in highschool by the teachers. There is no mood I could ever be in where I would enjoy whatever this thing is, At least for me anyways

This is so creepy!!!

this was a very cool film! i honestly didn’t think i would like it after reading some reviews about how ~Artsy~ the director is, but it kept my attention the entire time. love how the camera pans on certain shots, like the mother at her telescope.

About 11 minutes in to the film I suddenly felt ill. I had a splitting migraine headache in the center of my forehead and I felt like all my energy had been drained. I managed to gobble down 4 Advils and crawl in to bed. I layed in bed in a semi-conscious, dream-like coma trance for about an hour and awoke thinking about how I needed to find out what happens next in the movie but I was unable to move for about another half an hour. I finally dragged myself out of bed and continued watching the film until near the end of Chapter 8 when I got that queasy energy drained feeling again (this time without the headache fortunately). Upon reaching the bed I immediately passed out for a little over 4 hours. I woke again (this time not caring at all what happens next in the film) and continued to watch the film from 102:15 to the end.

The good news is that the musical score to the film is magnificent. And I loved the foghorn (FART!!).
I’ve seen about 75% of the movies on here and I would put this in the top 5 most effed up. It definitely belongs here.

Just be cautious if you attempt to watch this. The editor was making about 350 to 500 edits per minute and I believe that is what caused my illness. Would I watch this again? FUCK NO!