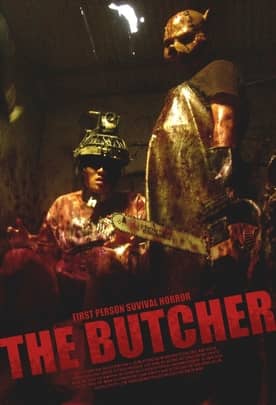 Plot – Spoilers:
Four people including a couple are bound and awaiting their unknown fate in a warehouse. They have cameras mounted on their heads that capture a POV of their captors, while standalone cameras provide alternate views. Without wasting too much time, it becomes clear that they’re part of a snuff movie produced by an experienced gang with an international reach.

The star of the movie is a slightly retarded man who wears a pig mask and who is mostly controlled by the ‘Director’, whom the rest of the gang are also fearful of.

The Butcher with its POV scenes provides an alternate intrigue to the whole snuff scene and has its share of brutality including a woman’s eye being gouged out and POV sodomy and torture of her husband by ‘The Pig’.

good movie but the final part isn’t good, the guy had tooooo much lucky

Hmm meh, if you are not pleased go watch Grotesque, now that was awesome!

if your here for gore this aint it, like the victim pov idea but you cant see shit an i just wanna see people chopped up… is that to much to ask?? 5/10

in a korean 7:10 from scripts are not match they are talking “hey that shit open eyes.”

The camera’s on the head of the victims (POV) is novel, though at times the camera movement is excessive and can be somewhat annoying. The theme of a couple as victims was also (imo) done better in the film Grotesque (also on EUM). That said, at 75 min the film doesn’t overstay its welcome, and is nicely paced and speeds by. 3/5 camcorders

Almost every gore is off screen….not a good execution…..not a good movie.