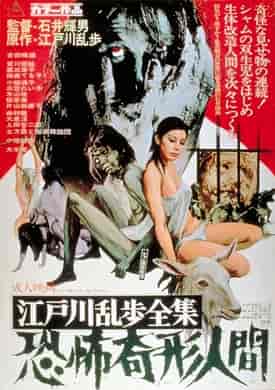 Plot – Spoilers:
Hitomi is an inmate at a mental institution, haunted by a lullaby and strange recurring images of a cliff and weird people. He escapes from the asylum and follows the distant sound of the same lullaby being sung by a woman on the street. The next day, he visits her at a circus where she performs, but she is killed by an unknown assailant before she can provide further details.

Hitomi is now not only a certified madman but also an alleged murderer and so goes into hiding, traveling along the coast of Japan, hoping to unravel the mysteries that haunt him. His efforts lead him to a recently deceased identical man, and a bizarre island populated with deformed people engaging in various perversions including bestiality and led by a crazy deformed man with webbed fingers.

Thank you greatly for uploading this one, always wanted to see it and Im glad I did, it is quite an impressive oddity right up my alley.

A strange vintage Japanese movie, but definitely not so f*cked up…

What an odd but strangely captivating movie. I spend two years in Tokyo and two things I know to be true. Japanese women almost always have the most beautiful breasts…. even after having several children… and Japanese women LOVE LOVE LOVE blonde haired men. It’s something they don’t see very often, like it’s almost taboo or something… and they’re infatuated by it.

Unique! Thanks for it.

A Japanese take on Island of Doctor Moreau. Can’t say I enjoyed it.