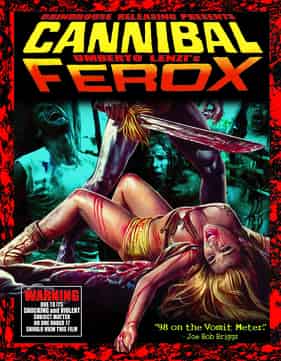 Plot – Spoilers:
A man recently discharged from the hospital is shot dead by goons looking for his friend, Mike, a pusher who’s ripped them off. Turns out Mike is deep in the Amazonian rainforests hunting for emeralds.

Meanwhile, Gloria and her brother Rudy are headed into the Amazon with friend Pat, a motel receptionist and part-time hooker. Gloria is the one pushing the trip as part of her research into cannibalism. She is of the view it’s a myth propagated by colonialists to justify their imperialism and is preparing her PhD thesis on the subject.

After losing their jeep to a swamp, the group trek along until they chance upon a couple of dead tribals. Mike and his injured accomplice Joe emerge out of the bush and spin a yarn about escaping from cannibals which makes Rudy suspicious. The truth is a bit more complex and horrific as they all soon uncover.

Though Cannibal Ferox came after Cannibal Holocaust, director Umberto Lenzi is often credited with kickstarting the cannibal genre through his earlier works. There are plenty of scenes of animal killing, cannibalism and gruesome torture in this one to archive it as one of the nasty ones in history. 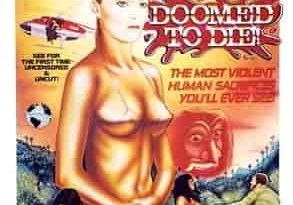 Wow. the worst acting and writing I have ever seen. Some scenes are gruesome, but the movie is one of the worst ever.

STFU and let others watch this classic.

Must be watching a different film. This is a fucking masterpiece. Hilarious dialogue. Top notch gore. And loads of fun.

Love it. Tied with C Holocaust for me. It’s that but with more storyline.

An absolute stone-cold classic. Sure it’s terribly made, with bad acting, terrible dialogue, awful directing and a completely pointless and illogical b-plot, but it also has such a great atmosphere, gruesome nihilism and fantastic brutality. Highly recommended to anyone looking to get into cannibal films or see what else there is after Cannibal Holocaust.

Top notch acting would have made this classic a gem.

I had high expectations after having a great wank to Cannibal Holocaust and was disappointed. I would prefer more nudity and less killing animals. Still not a total waste of time.

What a cool old school Jeeep, I am looking for one to buy.