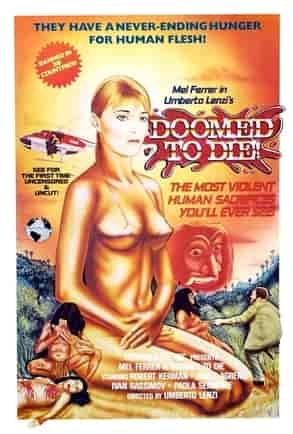 Plot – Spoilers:
Sheila, a Swedish blonde speaking Italian and from Alabama is summoned by a bunch of Italian-speaking NY cops to help them understand what became of her sister Diana who went missing six months back. An Asian looking man was seen murdering a few men in NY and the cops feel Diana is linked. She was last known to have been part of a ‘back to nature’ cult led by a junkie-turned-godman, Jonas (roughly based on Jim Jones).

Not much is known of Sheila herself, except that her father owned a cotton mill and that she was depressed until recently. She’s full of vigour now however, and sets out boldly into New Guinea where her initial investigation suggests Diana might be. Along the way she hires a Vietnam veteran whose Rambo skills will be useful in combating the cannibals that infest the jungles there.

Eaten Alive has some glaring plot holes, but this isn’t a movie you watch for the story. The cannibal stuff is decent as can be expected from Lenzi, the man who kickstarted the genre. The cult angle which dominates, also gives the the cannibal excesses some respite. 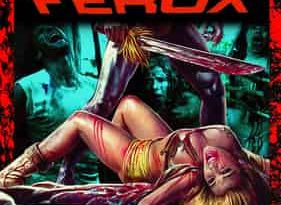 Definitely a comedy. I really enjoyed the animal scenes (they looked real, like actually) and the forced sex, which there was a lot.

“Oh I LiKe tHe aNiMaL cRuELTy sCeNeS iT mAkeS mE eDgY aF, BeTtEr tO mAke iT cLEaR tO ThE wHoLe WOrLd tO KnOw”!

well said kruko, I was thinking the same thing, and I’m vegan.

You’re a vegan? Wow! I swear, ppl like you make me even more grateful for my neighbor whose veganism I would never have known about had he not politely declined a dinner invitation! Hey everybody, Once I drove 22 miles out of my way to take an injured Starling I found in the park to a rescue. Can I get some Brownie points too?

It’s not about being edgy. It is about expressing admiration towards an often unrecognized career in the movie industry.

Did your parents play tennis with your head?

Don’t sweat it dude. In this era, you’re lucky you don’t have a multitude of pretentious sissies accusing you of being an “Edgelord” for saying you like the way a scene was captured and making a little “tongueincheek” gest about it being a comedy.

What a hideous combination of white chicks with big boots, savages, some fake rape, terrible fights and other loads of rubbish. However it was enjoyable.

I only knew of the Eaten Alive movie about the psychopath feeding his victims to a crocodile. Supposedly based on the true story behind Joe Ball. “Alligator Man”. For those who didn’t know about it and would want to check that one out also.

i enjoyed it,8/10 tho hate the animal scenes,they looked real because they were real….but i concede thats how nature is and including those cut away scenes helped emerse the viewr into what surroundings the people were navigating tc.oldy but still a fun watch the whole movie.