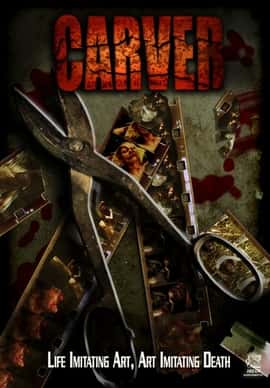 Plot – Spoilers:
A bunch of campers hang out at the wrong places, annoy you with their presence, do stupid things and then suffer. They also stumble on a stash of snuff films and laugh at them. And so get to perform in them. Carver is what Camp Blood wanted to be.

Yeah…. had to go for a 10min break just after the 47min mark… okay film, couldn’t tell if it had dated a bit or was purposely filmed as it was (I’m no Barry Norman, don’t judge!).

What always amazes me about these “college kids go out to commune with nature (plus drink and get their rocks off in the pristine environment) is just how stupid they are. One wants to “go for a dump” – surrounded by trees and lots of other places where he could do it, he chooses a sus-looking outhouse. Absolutely HAS to do it there.

And guess what happens…..

Thanks for the new film admins, was actually much better than I thought it would be!

(End of credits: ‘Proudly made by hardworking children in factories’ haha)

Film was a pleasant surprise honestly, I got some good hicksploitation vibes from it. While obviously amateur n low budget, the acting wasn’t completely awful(aside from them not caring about dying it seemed like), the film progressed without leaving me bored, and the bar+house were actually decent settings, imo. I assume they were going for an early 90’s (?) era setting for some reason, w the 90s cellphone, funsaver camera, cassette walkman, and dudes initial airbag comment. Maybe this was the reason the overall picture had a light fogginess to it, to give it an older trashy feel, I dunno. Cinematography wasn’t completely terrible either, suprisingly.

*Some* of the sfx I felt were pretty damn good too, especially the nail to the head!! I was happily surprised by that one. Ball scene was poor but pretty funny cringe too. The soundtrack felt above average as well, and added to the overall hicksploitation feel(the original turkey in the straw song was done by a blackface singer btw). I only wished they fleshed out Carver a bit more, imo.

I’ll give it a (5+1)/10, a fun watch but nothing remarkable, but a smidge above other films of this generic nature, I enjoyed it tho. Btw, it got the bonus point in my book for Carver using a crowbar attached to a rope as a grappling hook, lmfao! If I haven’t seen it, it’s new to me;)

Another film that definitely fits the description for this unique site. This definitely deserves to be part of the collection of effedupmovies. Thanks EUM. Cheers to you!

I actually own this. I enjoyed it for the most part even though the ball scene looked fake as hell lol

This one is quite predictable and even mostly corny, but it does the job. Somehow the last half an hour feels a bit better and more interesting than the rest, but maybe it was just me and my mood. Anyway, as said, this movie is certainly in place here.

unrealistic ,it was a good movie if ur bored its pretty entertaining it had some real plot twists that i didn’t see coming …however some of the characters could have had better and more realistic reactions to someone trying to kill them … 2 and a half stars

The films had such bad acting it was almost funny! XD

Stupid teenagers in the woods. YES. Madman on the loose. YES. A formula for a myriad of teen slasher movies. YES. Is this any different? YES. There is some great gore and some brutal violence that would not be found in any slasher films in the 70s and 80s. There is also a scene that will make most guys balls crawl into their bellies. Yes, there was a few holes in the plot but they are forgiveable when balanced against the nice sfx. Overall, a good example of this type of film.

what a fucking idiot, “dont kill me” bitch just for that ur slut ass can die

This was an “alright” movie. Truth be told, I’m a gorehound, and based on the IMDB reviews this sounded like it would deliver the goods.

There is very little in the way of gore in this film. Hell…there’s not much straight-up violence either. There were opportunities but they were wasted IMO.

Thanks for upping it though. It’s one I’ve wanted to see for a while.

I feel like someone told the blonde in the hat that she could be the next Sheri Moon-Zombie and she sadly believed them. Half hour in, they’re all still alive.. I need a smoke break.

Great movie, although at the beginning it says “based on true events” and at the end credits it says that this is a work of fiction

“Annoy you with their presence…” lulz!! For some odd reason this green-haired fuggly-as-fuck thing in desperate need of a shower popped into mind… Now lets see how many of them I’ve triggered for sport.