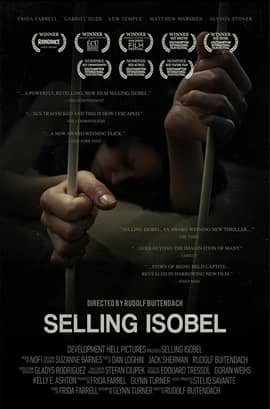 Plot – Spoilers:
A fitness instructor Isobel is approached by a man at a cafe who offers her a modelling job. It’s half a day’s work, the money is tempting and Isobel who’s a young mom is frankly flattered. As you might expect with a movie on this site, the modeling job turns out to be bait and Isobel finds herself held captive and prostituted.

Selling Isobel isn’t as grim as several others on here and even includes some seemingly ludicrous situations. But what makes it fairly unique is that it’s based on the experiences of lead actress Frida Farrell. As a young Swedish actress-student in London during the mid-’00s, she was held captive in a flat for a few days and trafficked. In her case, she escaped when her captor left the door open just before the ‘special client’ came in.

In her own words from an interview with Cosmopolitan:
“I felt so embarrassed afterwards that at first, I didn’t want to tell anyone. It took me four days to contact the police. Although 14 years doesn’t sound like much, back then police didn’t seem to take crimes like this as seriously as they would now. The officers asked me how I got to the flat in the first place, if anyone had forced me in, and when I told them I’d walked in on my own it was almost as if they couldn’t take me seriously.

They didn’t say as much, but it felt like they thought it was my own fault for going there in the first place. I was so humiliated that I left the police station.

I don’t know if Peter has ever been caught. The police said the apartment was rented by the week, that his fingerprints didn’t match any in the system, and that his phone number was attached to a pay as you go sim card that had been shut down. His website was traced back to Eastern Europe but they couldn’t locate him, so that was pretty much it. There were no more avenues to explore.”

Remember – If it sounds too good to be true, you’re probably going to wind up in a cage and sold to a group of well-hung Arab men for their sexual entertainment.

And once again, I’d like to thank the fine folks at EUM for posting this one. I really enjoyed it!

I love you madly and what to buy you all Cadillacs.

“well-hung Arab” is an oxymoron

u r an obnoxious moron

The reproach and disparaging condemnation are mortifying.
Gratified for this upload Admin x
Impugn to bestow you with gifts though…

I usually like this genre but this one was stupid. 32 billion dollars per year is spent on sex slavery? How the fuck could anyone know that, it’s not like people in the industry file taxes

It’s just like how they come up with the numbers in the drug trafficking trade. They set a value based on the industry standard and then use a multiplier based on a percentage that has been seized in a particular time period. It’s all based on speculation, but actually a bit more accurate than you might imagine. But I will tell you this – it does indeed run into the tens of billions of dollars on a world-wide level.

To put it in perspective, think about a girl who charges $100 a date. For simplicity’s sake, let’s say she does this an average of 3 times a night, 6 nights a week. 70% goes to her pimp… who has 10 girls working for him. In NYC alone, there are an estimated 250,000 sex workers. Now multiple this on a world-wide level. Now, figure in the seriously high-priced guys and gals who charge as much as $1,000 or more. I know for a fact the Bunny Ranch in Nevada has girls that go for as much as $10k a night. Then there’s the “kiddie” factor with the prices running into the tens of thousands of dollars.

Sure, my number are a guesstimate, and the ones I’m quoting are someone else’s guess… but still, the numbers are absolutely astronomical. Perhaps even bigger than the drug trade.

Her boyfriend was sure one dumb fuck. Or maybe didn’t care enough.

He gave not one fuck, it’s transparent and comical, he’s a craven caricature.

Not bad for mindless entertainment but it’s no classic

Bit liberal handwringing for me and that song at the end ..
Fucking revolting

Then there’s us, looking for gore and rape scenes on this site and pretending we’re just educating ourselves about the evil in this world

Imagining a lot of women and children lived theses kind of situation is such a happiness killer, being drugged waking up and having dirty strangers inside of you ,with all kind of diseases , not even being able to suicide yourself, morale is : think about a way to protect you and the people you love in case it happens

I tried.. I fell asleep. This movie has been done a thousand times.. just ask Liam Neeson.

“i have aids too”

haha that shit chacked me up too bro XD

my favourite part starts at 1:41

The movie was very good and the acting was great, bit It looks like the actress was a lot more worried of not dropping her towel even if she was alone in the room, I don’t see that happening if that was the case on real life, that was my only complain, besides that, a very good movie.