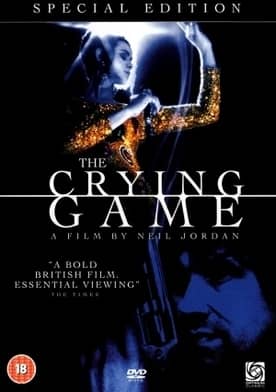 Plot – Spoilers:
Jody, a British soldier is taken hostage by the IRA in Northern Ireland, in the hope of securing the release of important IRA members in British custody. Fergus who leads the operation, takes a liking to Jody’s incessant chatter and the two grow to trust each other over the next few days of Jody’s captivity.

Jody is skeptical about any hope of release and repeatedly tells Fergus to someday find his girlfriend Dil in London and pass on his last thoughts. The British government doesn’t give in to the IRA demands and Fergus is entrusted with the task of executing Jody. Though it gets botched, Jody is killed and Fergus escapes from the British Army into their homeland. While in London, he finds Dil and slowly falls in love with her, though there is something about her that’s apparent to everyone, including us, that Fergus is oblivious to…

I truly appreciate Neil Jordan’s beautiful take on M Butterfly; a personal favorite. Truly too bad that Jaye Davidson didn’t wish to continue his acting career; he and Stephen Rea were wonderful together. Forrest Whitaker and Mianda Richardson round out a fabulous main cast. Overall, beautiful film. However, if at all possible, do not watch this film as a teen, with your parents. Just saying.

Spoiler: but for a noir romance this had such a happy ending! It’s tense and tragic in parts but that one shooting was sooooo satisfying. Maybe after watching so many movies on this site I expected Dil to be atrociously violently tortured, and I’m so happy she wasn’t. It’s honestly been a long time since I’ve seen such a beautiful, emotionally intense film. Awesome upload. Thank you!

I randomly wondered what happened to the trans from the crying game. I was a big stargate fan as a kid. So I Google him and he is jacked AF now. Like he has this lumber jack beard and looks like a short Dewayne Johnson. He even has a hot wife. It was the polar opposite of what I was expecting to see.