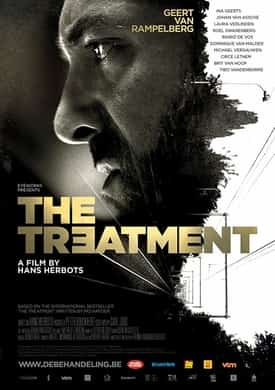 Plot – Spoilers:
A couple are found chained and held captive in their home. Their kid is missing and everything points to a serial pedophile having terrorized the family. Chief Inspector Nick Cafmeyer has a tormented interest in the case as his kid brother was abducted by a pedo and never found. The prime suspect from back then was released for lack of evidence and now regularly writes taunting perverse letters to Nick to mess with his head.

Nick’s investigations lead to the bizarre, with local kids describing the presence of a troll peering at them through their windows at night. The crime site also has weird graffiti about female hormones and copious amounts of human piss that makes Nick wonder what or who he’s up against.

The Treatment is bleak in its mood and settings and reminiscent of Se7en, but is a taut thriller that holds its own across a couple of hours.

This is a very good movie. A must watch.

Good movie, could watch it again. Don’t miss this one. Thanks EUM

Holy shit that was a terrible movie. Just another forgettable, generic catch-a-criminal suspense movie. It could have been 20 minutes shorter just by cutting out the scenes of a woman digging through the god damn floor boards. 50 minutes if they also cut out all the scenes of the main character sitting around with a constipated look on his face not saying a word. All this cryptic talk about a “troll” and it’s just some dude with mental problems. That’s it. Why is everyone referring to him as “troll” anyways? He just look like your average, fat German sped.

Easily one of the best films on this site, so good I purchased it on iTunes after viewing it here.

More of this & less of the Torment/nf713/Dead Nude Girls shit please admins!

Very nice. Like a decent TV drama … I’d have like it a bit longer with a tiny bit more character development. Still great story

Quite fast paced and not too shocking. Definitely one you can watch with the family.

Fantastic film. “The Treatment” tells a gripping story of a police hunt for a dangerous Belgian pedophile. Very chilling at times and enough to leave viewers disgusted. The acting and camera work were superb. This is a well packed dark mystery/crime thriller. I give this a solid 7.5/10
Definetly a must watch on this site

The book is better

Yes, tense thriller all thru, I hate/love this subject matter, fascinating and repulsive at the same time… Great ending. Not all that effedup, but I don’t know bout watching it with the family.