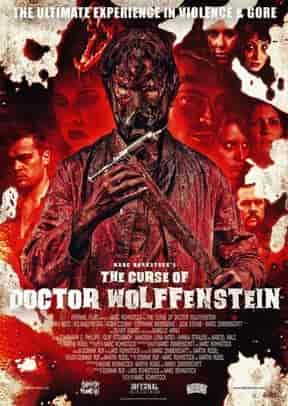 Plot – Spoilers:
In 1930 Germany, Dr Wolffenstein is obsessed with solving mortality and develops a serum that he tests out on animals and dead bodies stolen from graves. His behavior frightens the villagers and they bury him alive one rainy night.

But Wolffenstein survives and lives well into the 2010s, continuing his research and experiments. The only problem is – he needs to keep replacing body parts as they rot away – and so his cellar is well stocked with abducted victims. Meanwhile, a group of overgrown teens are on their way to a rave and their paths cross with Dr Wolffenstein.

The Curse of Doctor Wolffenstein has some obnoxious characters with bad acting upon whom you only wish evil. But there is plenty of gore and a surplus of machetes buried into skulls from different angles to kind of make up for its 2 hour length.

One thought on “Curse of Doctor Wolffenstein (2015)”