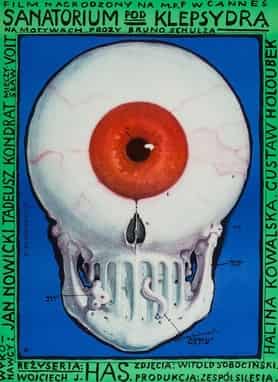 Plot – Spoilers:
Jozef is a Polish Jew visiting his dead father at a strange sanatorium where time is reversed to a period before a person’s death. The dead person remains asleep and various possibilities are explored to see if recovery is possible.

Jozef starts exploring the sanatorium and this leads to a series of surreal experiences of great visual splendor conjured from memories mostly centered around his childhood. There are questions regarding his sexuality and the ambiguity of a girl/boy he loved that pretty much remain unanswered.

The Hourglass Sanatorium is a fascinating visual experience and it’s quite likely that the whole dreamworld is being conjured up by Jozef as he lies dying somewhere. At the centre of this dreamworld are the fundamental questions:
Are you better off in a dreamworld than in reality?
Is a boring or painful – yet well-defined – reality preferable to a muddled dream?

The Hourglass Sanatorium has also been described as a representation of the decay of post-War Jews in Poland, but that’s probably an angle for those with a deep understanding of the history of Jewish society in Poland.

Beautiful and surreal, loves the landscapes, the worn out buildings, dust and the memory capsules…but a boring film that I couldn’t keep my eyes open to, or I just have a short attention span to these kind of films ?

usually watch a film to the end but couldnt here

Beautiful, don’t cheat yourself by not finishing it.

This is one of my favourite movies, a total majestic craft.