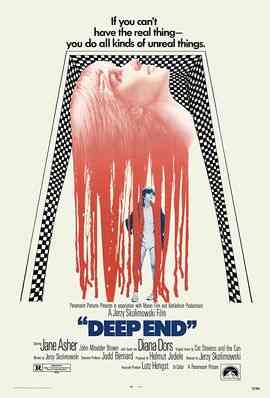 Plot – Spoilers:
Fresh out of school, Mike lands his first job at a sketchy bathhouse, where he is mentored by an older attendant Susan. Susan has a rich boyfriend, but she’s also having an affair with her former PE teacher, while also casually entertaining the clients at the bath for extra tips. She tries to initiate Mike into her ways, but Mike isn’t keen, especially after his first experience with an old George Best fan who smothers his face against her breasts while having a pub-conversation with herself about a football game.

Mike soon takes to stalking the flirtatiously lovely Susan who enjoys playing with him. His obsession eventually leads to an iconic cinematic moment, where Mike cavorts lovingly with a cutout of Susan in a swimming pool. And if you stick with the movie, the ending proves to be even more memorable.

Even more Spoilers:
Deep End plays around with oddness. Susan initially is supposed to be the most deviant of the lot. But she eventually seems the most normal of them all. Everyone else looks and behaves bizarrely. It’s not just about their kinks – their expressions and acting are in start contrast to her. Mike for example, talks in a halting way which adds to his weird personality. The PE coach is a pervert groomer who probably forever altered Susan’s approach to sexuality. And there’s always the football lady. 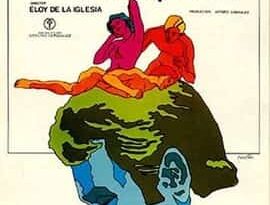 I’m not fred to say I’m the first and not fat.

It was OK, left me wondering wtf was going on alot but eh

This came out towards the end of Britain’s golden age of enjoyable film oddities. Always they were akin to a sorbet after a heavy course of USA produced self-indulgent nonsense.

Beautiful that.
A mix of West German and England and yes… The early seventies was just like this.. . . I know.

Very British… Very coming of age and a worthy addition to this fantastic site.
Jane Asher is gorgeous here too.
Paul McCartney knew her well . . .

Bizarre is right. Then having Cat Stevens at the begining (pre Harold and Maude) just makes it even more of a mind-fuck (probably only for me). In the end it is like a Saturday Morning Picture with some heavy petting.

I enjoyed the oddity and originality of it; the atmosphere and weird carachters/acting, and not really knowing where it’s going