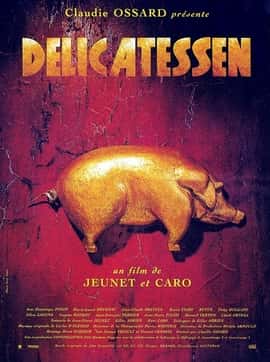 Plot – Spoilers:
In a post-apocalyptic French town, the barter system is in vogue. Those who have nothing left to barter, pay in flesh. The surface humans dine on the troglodytes, a rebel bunch of underground dwellers who live among the sewers like rats and are titillated by delicacies like corn. But the troglodytes have become slippery and are hard to come by. For the tenants of an apartment building, their landlord, a butcher is the big daddy who lures unsuspecting folk to the apartment where he eyes their flesh-potential and butchers them when they reach their optimum mass.

Delicatessen is a bizarre comedy featuring some of the most inventive and hilarious ways to kill yourself. Squeaky bed springs have also never been the source of such intense musical hilarity. The cannibalism is merely referenced and so there is no gore, if that’s what you were looking for. If you enjoy the bizarre, this is one of the top guns.

Ok movie, i give this 5/10, if you’re looking for gore you won’t find it here, just a slow paced story with very good acting.

The movie is classic like The City of Lost Children or Dark City. I saw it years ago in college. It’s not shocking or gory, per se, as with some other entries on site, but definitely a good movie and comical bc it’s weird af. I’d give it a 6.5-7/10.

I only came here to read the comments.

Wow that was something else forsure.The idea is really cool but the bad guy was a magooo and well magoos are magoos and honestly the starting credits show so much and made me to expect more but I felt like there was not enough horror to much dry romantic horror shop moments its not so good when wrong turn makes you look foolish in there canibal ways lol they were off inbred babies and this guy is just a regular possibly small portion of one but still XD he should of been more clever.
Overall. I enjoyed this movie but would not want to watch it a second time till after a while

Weirdest thing I’ve watched in quite a while.

so i watched this film its weird it has no plot i would stick to jodorowskys movies personally!

What kind of stupid-ass edgelord sits through 01:39:18 of unadulterated balderdash and acts like he gets it.

It’s the same feeling I get from watching The Suicide Shop (and someone had already mentioned The City of Lost Children).