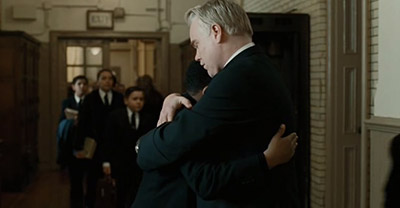 Meryl Streep is the strict principal of the parish school and is assisted by a young naive teacher-nun played by Amy Adams. Hoffman is the parish priest about whom Meryl has lingering suspicions given that he is also the gym teacher of the young boys at the school. She asks Amy Adams to keep an eye out. One day, Amy notices an odd thing when Hoffman interacts with a black lonely kid who also happens to be an altar boy. This leads to a confrontation between the three adults with Meryl accusing Hoffman of inappropriate behaviour.

Doubt was nominated for several awards and all the four main actors received Oscar nominations for their performances. This is a very well written movie that derives its brilliance from the performances by the actors involved. The title Doubt is appropriate because that’s what the entire movie is about – Doubt regarding Hoffman’s guilt.

The Director based Amy Adams’ character on an actual teacher-nun of his when he was a kid at a Catholic school.

Favorite scenes:
The first confrontation scene in Meryl’s office is nothing short of brilliance. It’s a game of asserting dominance. Hoffman casually sits in Meryl’s chair and she soon pays back by opening the shutters with the sunlight blazing onto his face. Caught in the middle, is the naive yet somewhat cunning Amy Adams who chooses to be disingenuous about Meryl’s insinuations – it would seem that she chooses this approach because it makes things simpler and not terrifying, which her young honest mind doesn’t seem ready to face up to.

The closing scene with Meryl Streep and Amy Adams, where Meryl breaks down – What a performance. While there is little doubt by this point, regarding Hoffman’s guilt, the doubts Meryl expresses appear to be related to her personal faith and the institution of the Church. When the Church and its powerful office bearers seem aware of the abuse running through its ranks and yet choose to look the other way, where does it leave someone like Meryl who is ageing and helpless in her frustration? 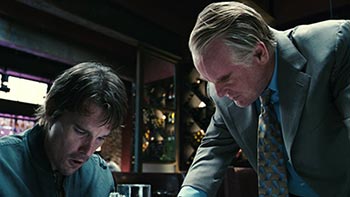 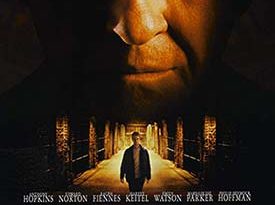 I thought the ending where “Meryl” breaks down was a enactment that now that she forced “Hoffman” (the priest) to resign, and now that he’s moved on to another catholic school which seem more like a promotion then having them coming down on him about this misconduct with a young male student, leaves her second mind if there’s any, that maybe she could’ve been wrong about the priest and she now has to live with that on her conscious and with GOD after being the hard ruled TOUGH nun principle.

I don’t know if my brief synopsis of what I thought the ending was about but, if not then it sure would’ve been more of a twist to the ending, for sure!!!!!!

Amazing, enjoyed it. Thanks for all these posts, keep up the good work!