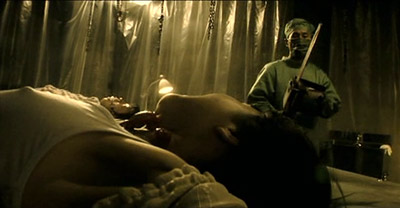 Plot – Spoilers:
There are three characters in this movie – A serial killer who appears to be a proficient doctor and surgeon and the couple whom he kidnaps.

Grotesque begins with the kidnapping of the couple and doesn’t waste too much time getting straight to the torture. The serial killer appears to be impotent and claims to get sexually satisfied by watching his victims, attempt to stay alive. This could well be a lie. It could be that having killed so many before (there is nothing to suggest the couple are one of his early experiments) he is bored of seeing his victims give up on living. The only thrill left for him is to give them a ray of hope of escape and watch them cling on to that as they endure the most unimaginable torture and pain. Having said that, the awkward dating scene between the couple in the cafe doesn’t leave you with much sympathy for them until the middle stages of the torture sessions where it gets brutal and you can’t help but feel sorry for their miserable situation.

It seems a bit unrealistic that the male victim would endure so much pain on the female victim’s behalf given that they had just started dating. But it could be that he has given up all hope of escape and feels like attaching a noble purpose to his last few living hours.

The scene where the killer snips off the girl’s nipples while her breasts tremble in fear is realistic and likely to affect.

Grotesque has one of the most ridiculous yet stunning sequences ever played out when the male victim has to endure the pain of his intestines spooling out while he staggers towards the girl. And then when he notices the metal wire and lets out a defeated gasp, it is cruelty and dark humour at their peaks.

Shit movie, boring as fuck and barely any story. In the scene where they are sitting on a bed, they talk like nothing happened. And the ending is unrealistic as fuck, who the fuck can stay alive for few seconds then bite someone’s neck after being decapitated? and the scene where she talks about the killer’s mother is just stupid. There’s no backstory or explanation. The whole movie is about the torture. I give it 0/10 rating

This is like Funny Games to some extent, spoilers:
>there’s a bet that victims will be dead at the end of the movie and the victims + viewers make a bet they’re not
>victims are not allowed to break the “rules” or they’ll be punished
>there’s an intermission where they lick their wounds while building up the hope, but the movie itself doesn’t progress much while the captor is doing something else ; also it would just end too early if everything went accordingly
>metal wire and remote controller scenes can be compared: take all the control off the victims and viewers who wish there could be a satisfying ending
>at the end the bad guy(s) go unpunished because the show must go on

The only thing missing here is the doctor breaking the 4th wall “do you think it’s enough?” 😀

Perfect movie for this site. loved it.

Best movie depicting someones head getting blown off to Land of Hope and Glory, except for Kingsman.

Snipping her nipples off had me recoiling, pragmatic that scene.

Another great movie for a late friday night with the lads. 12/10 lads would recommend

What the fuck was wrong with these fake sounds they tried to replicate even when she was spitting to his face, all of that makes movie boring as fuck. They should have probably spend more on sound effects rather than these trash visuals. Over all its not a good movie to watch.

that surgeon is a romantic at heart. cute movie.

Just another example of how fucked up Japs are, they continually churn out these films only to prove how sadistic they can be, especially to women. Dont get me wrong, I like gory films too, but unless there is a story behind it or some sort of justification for it, it is quite pointless. The same can be said for the AU series and VGT trilogy. Absolute misogynistic crap only designed to gross people out and humiliate women. No thanks.

i just shit my pans my buho burns

Me myself and I

Sick and twisted! Had me the whole
Time rooting for them. Lol