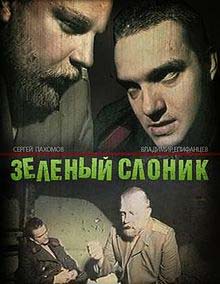 Plot – Spoilers:
Two men are being imprisoned in a dirty cellar with sewer pipes running through it. The reason for their imprisonment isn’t clear but there is a mention of impending execution. There are two other characters who appear later, the Captain holding them and his mentally broken slave who claims to be a Colonel.

The first half of the film is mostly dialogue driven and hilarious as the older fat prisoner deliriously drifts from one anecdote to another, driving the younger guy to despair. Keeping time with the incessant talk is a constant drip from a leaky pipe that offers no letup in a scenario where you’d normally imagine silence is a freely available commodity.

The fat one seems to be genuinely insane, a fact the younger guy takes a while to comprehend. He kind of represents hope as he tries to keep it together while the fat guy rambles on and on even indulges in some scat fun. It could well be that they are really not guilty of any crime but are merely objects in some perverse fantasy of the Captain. Eventually, it’s the second half that throws up extreme gore action as the younger prisoner finally snaps.

The Green Elephant is shot in a home video style. This initially confuses you into thinking there is a third presence recording the conversations especially when the fat prisoner talks about ‘people’ in their cellar. This though seems unlikely and the home-video style possibly was used to convey a certain mood and dysfunctionality of the whole situation.

Favourite Scenes:
1. The conversations in the first half are hilarious and brilliant. What makes it funnier is, though the younger prisoner is forever asking the fat guy to shut the fuck up, he occasionally ends up asking questions to clarify the rubbish that’s being spouted. It’s like he’s been drawn into the madness and can’t help but pay attention to his insane cellmate.

2. The scat scene:
Before he takes a dump, the fat prisoner sort of offers his plate to his sleeping partner and seems genuinely excited about what he’s about to indulge in.

3. The use of the Captain’s windpipe like a sort of trumpet as they break into song.

An all time classic!

Just a question to admin: was is full uncut version or it was cut and censored in any way?

I believe without knowing the Russian history since 1917 and also the trauma that nation had suffered after collapse of soviet union, judging and understanding of this movie is impossible. It had a lot to do with the brutal soviet culture, trauma after collapse and also the not knowing future of the whole Eastern bloke. I have lived many years in pre and post soviet union and still don’t get this movie, however I can confirm that life is not a celebration over there. Also no female was playing any role in a movie directed by a woman. That’s a big issue.

Brilliant in its way of representing our dehumanizing system.

Any one else went to site shown at end? I did and lol I am still confused on what I watched I dont think this movie has any thing to do with military honestly I think it was a expierement for there mentally challanged and ones with anger issues like I felt like dealing with anger issues in the past my self I could see why the blood thirsty dude went crazy like how he did and I have a mentally challanged cousin and yeah he plays with his poop and I am glad I never seen him do any of that though. LIKE IDK how to describe what I just watched feels like what they would do to break them kind of people and well they broke alright but probably not in the way they wanted it seemed like they wanted to drill info in there head at shortest time.? IDK And his poo did look like a crossiant bread roll on the plate made me think did this dude smuggle in some bread ?… Well still better what USA does just throw them on the front line for human shields like when they would draft people they actually know better to not get full metal jacket XD Sorry for confusing comment this movie just has me a bit brain dead XD thanks for sharing Admin like all these other epic movies FUCK CENSORSHIP! 🙂