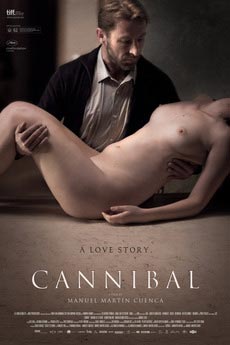 Plot – Spoilers:
Carlos is a master tailor renowned for his mastery in the small town he lives in. His shop is directly opposite his home and so he is able to voyeuristically observe his neighbours as he works by the window. A quiet man who prides himself on his precise cuts, he also has a secret fetish – a taste for women’s flesh. An isolated mountain cabin is the perfect hideaway to indulge himself and he is careful to ensure the women he kills are strangers far away from where he lives. After carving them up in his cabin, he neatly packs the fleshy parts he enjoys and brings them home to be steaked with a nice glass of wine.

His routine is interrupted when a Romanian masseuse Alexandra who also moonlights as a prostitute moves into his building and comes onto him quite strongly. Though he is attracted to her, he tries to stave off her bold moves and maintain his discipline of not killing someone known to him. But he is forced a rethink when Alexandra appears unwilling to give up on seducing him.

Alexandra soon goes missing but Carlos’ quiet existence is to be further disturbed when her sister Nina turns up looking for her. Though Nina is a twin and nosy, she goes about this in a subdued manner which is less intrusive than Alexandra. This trait gives her a longer lease as far as Carlos’ patience is concerned and he tries to get rid off her by paying her off rather than killing her. Her sincerity further ensnares him as he genuinely appears to fall in love with her and can’t bring himself to just off her and eat her.

Favourite Scenes:
1. The opening scene:
We have a voyeur view of the couple by the gas station and then suddenly we realize we are the killer’s eyes as he rolls up the window.

2. Carlos hunting the girl by the beach:
Initially I thought she’s Alexandra but it becomes evident it’s a different girl when she’s in the water looking scared and helpless. You can see her nowhere-to-go torment turns on Carlos who until then is fairly sober in demeanor

This is a sad movie. The ending. Nina was so pretty and she really portrayed a true look of love in her eyes for Carlos.

*big spoiler* dontbread if you havent seem the movie might ruin the whole movie. It really turned my stomach when she was laying on the couch smiling at him with that look as he gazed into the wall and told her he killed her sister and was going to kill her the night before also. How her facial expression changed. This movie really got to my heart.

It’s effed up for sure. Weird love story, well acted and well made film but it is really SLOW!!! I stuck with it because Olimpia Melinte (who plays Alexandra and Nina) is absolutely drop dead beautiful. It is a sad film. I thought it was really good. I give it 4 out of 5. It’s not gory or violent. It could have been a Lifetime movie if Carlos wasn’t a cannibal.

Didn’t expect it to be as good as it was, quite brilliant really. Very slow and understated but really moving, highly recommended.

Great film, heartbreaking at its peak.