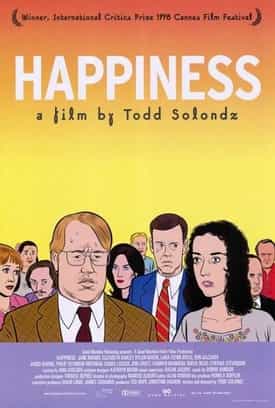 Plot – Spoilers:
The primary theme of Happiness is the absence of it in the miserable lives of its characters.

Joy is the youngest sister in a dysfunctional family that pretends to be close but whose parents are finally separating after a 40-year marriage. She is prone to crying and is patronized by the rest of her family who regard her as a serial loser.

Helen is Joy’s older sister and a vain successful writer. But deep down she knows she’s a fraud.

Trish is the oldest sister but is caught somewhere between the other two in her life. On the one hand she feels superior to Joy on the basis of having a family of three kids and an allegedly good life with her psychiatrist husband, Bill Maplewood. But on the other hand she’s envious of Helen’s independent success and active sex life. Trish and Bill’s marriage is a sham and unbeknownst to her, he has a big thing for little boys. It’s unclear if Bill has molested either of his two boys, but he appears to make a couple of attempts at grooming his older son, whose only current goal is to cum.

Happiness is one of those really fucked up movies that achieves this glorious status without indulging in graphic effed up content. Just the characters and their lives do it. Most people will find something in it to identify with, but its true greatness lies in how humorously some of the sickest moments are treated. 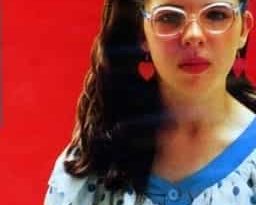 Love. Bleak with some gross concepts. Nice and depressing.

This film depicts an average American life. Brutally showcased by the Director.

the only fucked up thing in this movie is having to watch two old people make out. oh yeah and the pedophilia but still. ew

Todd Solonz new up in the same town as I did in NJ…. How cathartic and wonderful it is to see the fucked up, shiny on the outside rotten on the inside pageantry being portrayed on screen. “No YOU’RE so busy!!!”

Brilliant movie! Thanks for uploading EFM.

An X-ray over American Dream makes it easier for us to see the reality of life in America. These miserable characters carry big weight of desire for happiness on their back. Not many directors dare to touch this theme but todd solondz did it. Brilliant work although I am not a fan of American movies.

Guess he’s a bigger fan of American movies then he thought.

all the bullshit and fuckery, just keep a fake smile through it all.

trish and helen’s bios are mixed up

This movie is legit so good you sort of forget how unbelievably bleak and dark it is while watching it.
Hard recommend!

i loved this movie. very depressing but worth the watch

Comedy film made by woke NY liberals that love socialist and communist ideology. Overrated. It has it’s moments.

Fuck up ya cunts it’s a fuckin movie,watch it as such

a masterpiece quite literally. always will be a classic

My god… All I can say is the poor children. The end scene with the Dr. and his son chatting about his endeavors truly made my stomach churn. When he delivered that punchline tho I wanted to laugh

Lmao this was quite the ride. They don’t make movies like this anymore,and I hate it.

The Admin summary is spot on, and this is one effed up film. The speech between father and son near the end of the film is shocking. There were a number of scenes with Dr Maplewood were I found myself muttering ‘oh no, don’t’. Some great dialogue and great acting and Hoffman as always gives a great performance. 4.5/5 tuna sandwiches

“i can admit it that im fat and ugly” girl so is he, this is a match made in heaven