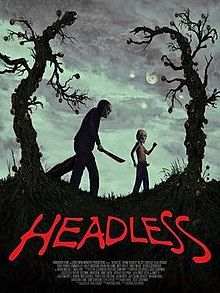 Plot – Spoilers:
Headless is like an expansion pack of the movie featured on a tape in Found.

The premise in short: a serial killer torments women before gouging and eating their eyes; then decapitates them and fucks their heads, before retreating to a cage to sleep in. He seems unwilling to stalk fresh victims but is goaded into repetition by a skull-kid, whom he created as a companion to escape a childhood of abuse at the hands of his mother and big sister. It’s noteworthy that the killer doesn’t speak through the movie other than in ecstatic groans and grunts while thrusting into his victim’s heads. And it’s the passion that he exudes during these moments that heightens the shock-value.

Headless begins with the trailer of a (not real) 1978 flick called Wolf-Baby and the tone and music attempts to recreate the feel of a ’70s slasher. But in its content, Headless is pure transgressive cinema – it’s not often that you see underage actors actually be a part of gore, like when the killer-child is fed a rabbit head. Not sure if After Effects was used to create such an illusion.

Incidentally, if you’re wondering what Skull Boy looks like under the mask, it’s the same actor who plays the killer as a child. 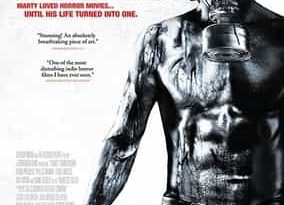 Not the best not the worst.

I do wish films would make a villain evil just because though as im tired of seeing a back story that tries to make you feel bad for the killer.

Fantastic practical effects. So is the atmosphere where the focus on solely on the killer. The main actor and the Skull Boy are fantastic in their roles. If it wasn’t for the secondary storyline it would be simply brilliant. A strong 6/10.

Thank you so much for your work guys at the effedupmovies!

Had to watch it just because I liked Found and the story of this film’s connection fascinated me. Definitely worthy of a watch.

I enjoyed this more than ”Found”, it had more thought put into it and there were more graphic scenes then its predecessor. A talented director who just gets better, check out ” The Bad Man” and Plank Face” also by this guy, certainly worth a watch imo.

Just a quick note to the guys at EUM. Apologies for the shitstorm my comments on ”Baise Moi” caused. It just goes to show how many fuckwits are out there with their caustic comments who need to get a life. To go from 20+ to 60+ comments within 2 days just to bag someone is just totally uncalled for and I am glad you shut down that site and cut those dumbfucks off. Cheers and sorry again.

ground breaking film – clearly a head of its time
so many references at the end – texas chainsaw, deranged and phantom of the opera – probably more
it should be called a face without eyes

Love it. Any other movies with a similar kill count or higher with same kind of torture or mutilation on each kill?

a straight up masterpiece

That was a pretty good movie.