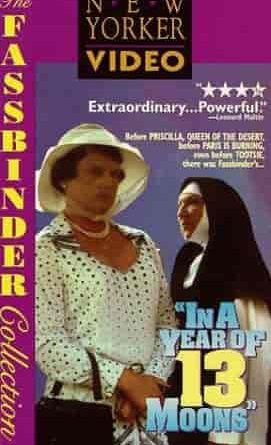 Plot – Spoilers:
In a Year with 13 Moons dramatizes director Fassbinder’s guilt and pain following the suicide of his former partner and actor, Armin Meier.

Elvira is a lonely and confused transwoman who’s rejected by gay prostitutes as she no longer has a cock. Her lover of several years now finds her fat and repulsive and walks out on her. Elvira’s current hopelessness is compounded by the fact that years before her transition, she lived and thought like a straight man and was married with a daughter before she fell in love with her boss, Anton. On a whim that he would love her back if she were a woman, she transitioned, only to be rejected by Anton. Elvira was most likely a lebensborn child, and so the fact that Anton is a Jew adds another angle to their relationship.

The movie follows a few days in Elvira’s life as she drifts between uncovering her childhood at an orphanage, clumsily trying to reconnect with her daughter, and desperately seeking acknowledgement from ex-lovers and even strangers.

While the first half of the movie has some scenes of great depth that capture her pathetic existence, the latter half includes incoherent ramblings by different characters that are probably meant to allegorically represent Elvira’s downward spiral. There is also a notorious sequence at a slaughterhouse featuring cows.

This one it’s just straight up sad…