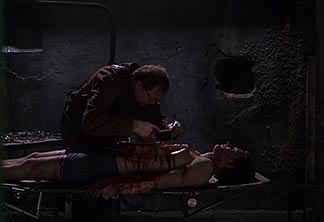 Plot – Spoilers:
Two American backpackers Paxton and Josh team up with an Icelandic friend and head to Amsterdam where they attempt to do the usual getting high and laid stuff. Brimming with hormones, they are seduced by a story of Slovakia being the land of pussy and more pussy and enthusiastically head for Bratislava.

After they check into a Hostel, their spirits soar when two attractive and sexually open women befriend them and appear taken in by their American charm. From here things begin to unravel as Oli first goes missing and the two hardons discover the existence of a sadistic service called the Elite Hunting Club.

It’s a different matter that the three friends aren’t the most likeable; so you don’t feel too much sympathy for their misery 🙂

Random:
1. This version here is the Director’s Cut. In the other version, the ending is different with Paxton murdering the Dutch businessman in the restroom, instead of kidnapping his daughter.

2. For the scene where the kids-gang destroy the car, director Eli Roth apparently offered them the car and asked them to go nuts with it.

3. Takashi Miike has a special appearance as the Japanese guy outside the Club whom Paxton chats with.

Favourite Scenes:
1. The torture scene of Josh:
During his meeting with the Dutch sadist in the train, he had reacted repulsively to the latter grabbing his thigh. As a reward, he now gets a drill through the very same thigh.

2. The torture scene of Paxton:
The German seems to be a first-timer and is therefore susceptible to Paxton’s entreaties. He is shown to be clumsy and fidgety from the start and it doesn’t surprise you when he trips and ends up chainsawing himself.

That movie was awesome. The ending of this one seems a lot more brutal than the other ending

great movie but damn I hate this version’s ending

That movie was awesome. The ending of this one seems a lot more brutal than the other ending

I thought for years that this was a horrifying film because the cover art scared me when I was a kid. Turns out this whole time that even with the graphic violence, it’s a thriller at its darkest with a WAY lighter tone then I expected with no real scares to be found. And I had a blast with it.

*SPOILER ALERT!* The most underrated, funny/creepy AF scene is when an Asian Man in black sunglasses walks out after what we can safely assume was a grand old time of torturing victims to death, looks at one of the three tourists and says in a thick, Japanese accent “Careful…You coo spen ALL yo money in there!”. That Man was none other than TAKASHI MIIKE his own damn self! What a fucking cameo!

THAT is amazing! I wonder if he got some ‘inspiration’ here lol.

Omg I didn’t even noticed his cameo! How wonderful!

Good Creepy movie, however business as usual for americans. They are all good guys saving innocents and rest of the world is Evil talking Russian. Funking sick of this cheap propaganda.

Smh Kana was my fave

Great gore movie. I wonder if this sort of stuff actually happens irl. I was told that it does happen, by a reliable source, that this is commonplace in red rooms on the dark web, but one must pay a lot of money to view it, but would someone want to?

Certainly. It’s more about whether they have the means to find one or the money to afford.

I have seen some bad shit on the dark web, stuff is easy to find if u look hard enough, but like u say the live footage of CP and RR is not anything I would be interested in let alone paying big dollars for. I will leave that to the pedos and sickos who love it.

kidnapping children so not halal mode.