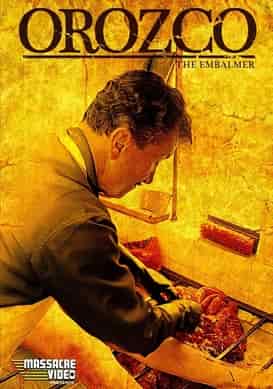 Plot – Spoilers:
Set in a derelict town of Bogota, Colombia, Orozco the Embalmer is a documentary that follows an experienced embalmer Froilan Orozco and his fellowmen as they deal with the almost daily influx of accident and murder victims. The process of making a dead body presentable to family members is unflinchingly captured and what makes it a hard hitting work is the depressing shadow of the townsfolk who live their lives around the bodies constantly littering their streets.

It also provides a perhaps shocking insight into how resilient a dead body can be to crude, rude handling by rusty, seemingly inappropriate implements. And yet how effective and efficient these scrap tools can be in the hands of skilled and experienced men.

Wow much love for uploading this here, hard to find little gem. Not really all that well made but it has a gritty raw charm that is unlike anything I’ve seen so far.

This is an absolutely fascinating documentary regarding embalming in Colombia. Mad how different it is done there. 10/10, worth the watch.

Excellent! I would add it to the “Mondo movies” genre too! 🙂

What a movie.
It isn’t very well produced and the producer isn’t very good at what he does either, in fact the little things he adds are severally offputing, even more so than the imagery it self, but what it lacks in cinematographic Fidelity it makes up with its absolutely brutal rawness.

It captures its Environment with little effort as it is. No romantic depictions, no social criticism, no message.

It is simply About the job of Orozco the embalmer, or More Precisely, it seems to be about the guy with a camera standing in a little shack in a delapidated shit hole of a city, filming Orozco, as the producer does not stop himself from making absolutely strange ruderemarks, unnecessarily integrating himself into this documentary and appearing as a mere Degenerated gore curious outsider that manged to capture something so engaging by chance and nothing more.

I’m Glad he did not feel the need to add anything more to this movie besides filming his environment and music.

How something so gruesome and plain can be this beautiful to me I don’t understand. This. Movie is entirely unique and true to its self.

Death. The ultimate mystery and the reason for life. This is mind bending and life changing.

The ‘best parts’ are on a shockumentary… I can’t remember which. The 90’s are a haze at the best of times.

Really cool watch. This one had a hell of an atmosphere to it

Fascinating and beautiful documentary. The soundtrack was eclectic but sometimes it was jarring and unnecessary. I get setting atmosphere with the shots of the surrounding area and people but it dragged on from the whole reason this film was interesting. Honestly the most unsettling thing for me was the fact that he wasn’t embalmed and had no grave. It was an honor to watch the final care of a humans life in the care of those that have grace and skill.

That is some serious dedication. A job like this requires such a strong stomach.

Gruesome but the scariest part for me was the town of Bogota, Columbia. What a frightening place. Orozco wasn’t delicate with the corpses and the job doesn’t call for that but the other embalmer was really rough with the woman corpse. I think he was playing it up for the camera. Good documentary. Sad ending.

Wow, I’ve really enjoyed this one. Makes me wonder if I should try embalming as a job. I’ll probably enjoy it except the formalin used there.

I can smell the corpses through the screen. Hypothetically, I wonder if the pain at the morgue is simultaneously being experienced by the consciousness in parallel dimensions with different realities & time weaved for the ex-owners of the vessels. The bleakness of this part of the world makes me think that creation is unnecessary, senseless and evil and how people treat each other is merely reflecting how they’ve been programmed to be… their carbon based bodies imprison the metaphysical energy to this animalistic world of vanity where they have to compete, subvert even kill for the survival of the imprisoning & limiting bodies that will eventually rot. At least, Death sets them free until they are tricked to come back to this simulation…Maybe there’s no Soul, just consequences of the evolution and pointless nothings, and both Life & Death are equally tragic.

EUM Holiday tours proudly present Bogota, Columbia, a unique holiday destination you will never forget. This documentary shows life in a derelict town and the work of two embalmers. It is interesting for both aspects, and the ending is also very unexpected. A ‘raw’ documentary that is well worth a watch. 4/5 belts

i really really enjoyed watching this. thank you for the upload

that was macabre but beautiful. definitely not your average mondo movie, it is so plain yet effective. makes you think about your life and death. the only thing disturbed me about it was how everyone normalised violence and dead bodies on the streets. a violent death is just a casual part of their lives.

also does anyone know the names of the songs used?

the opening scene song is mirame by bobby cruz and ricardo ray, but Idk about the other two songs. one plays in the scene when police are looking for drugs and the other one plays during children take a look at the dead body of a woman.

Fuck this shitty site keeps getting worse every time I come back CAN YOU PLEASE MAKE IT WORK!!!! I CANT FIND THESE MOVIES ELSEWHERE!!!11