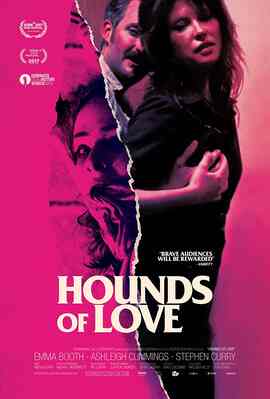 Evelyn lures the girls home, dousing their suspicions with her feminine presence, and later assists her partner John, in the sexual torture. She’s clued in to John’s specific needs – whether it’s lining up slices of bread to go with his habit of lining up stubs in an ashtray, or ensuring the general cleanliness of the girls who often end up pissing or shitting themselves.

Hounds of Love is roughly based on the Australian serial-killing couple, David and Catherine Birnie, but portrays the female killer more sympathetically here, unlike in the real case. It also doesn’t get too much into the violence, instead choosing to focus on the complicated relationship between the couple. But because it’s a pretty well-made film with good performances especially by Emma Booth, the violence though often alluded to, is tangible. There’s also a beautiful scene capturing dark sexual excitement, set against Nights in White Satin.

Random Thought:
If you harm another person because it pleases your loved one or is the one thing that can keep the two of you connected or if you simply do it because it’s rooted in plain old jealousy, how different is that from a killer who kills because it’s the only thing that fills the emptiness.

Hell yeah another awesome Aussie flick based on the David & Catherine Birnie murders back in Western Australia in the early 80s,really great film & while it doesn’t go into the brutal graphic detail,a very honest portrayal of the Bernie’s & their crimes,still a fucking excellent movie,similar vibe to snowtown,cheers guys…….oh that’s right saying thanks makes me a kiss ass right? Lol🖕

Oh wow, that was really good. I recognized Susie Porter from “Wentworth”, Marie Winter was one of my favorites.
I have to say that Ashleigh Cummings screams were intense!

I thought this was a great film.

Not a bad movie, but subtitles would have been nice. Had to put it so loud that I wonder why my neighbours didn’t call the cops…

In memory of Kirstie Alley I will be watching ..Drop Dead Gorgeous, 1999.. which may not make it to this site but is a nicely fucked-up, feel-good movie fit for the cheerful season.

Hey admin,
Thanks for you movie
Hounds of Love!

I don’t know how much
weirdness you can take . . .

soundcloud Pilo – I Forgot Your Name

Sure, there are licensing
issues, but purchase the
license for the
maximum Effed Up Movie
WIFELIKE
(currently on Showtime).

Sure, pay for the license,
but DAMN, show WIFELIKE
and you catalog to
the leading providers
Showtime, HBO, Cinemax, and Starz
to promote Effed Up Movies
as a service.

Your catalog, with the
licensing power of the big boys,
could launch an
underground sensation !

Feed WIRED magazine the story with

added to your vetted
700+ films and
Pure GOLD!

Sorry for the weirdness . . .
Whew . . .
I am a bot, and this action
was performed automatically.

This movie is a good reminder that women are always innocent victims and incapable of doing anything wrong. Until you read about the real events it’s actually based on, then you realise it’s all a work.

The ending just felt so fake & it didn’t make any sense. It felt like the producer just fabricated a feel good ending, ignoring many things that previously unfolded in the story.

When Evelyn murdered John, I have to assume it was because she was triggered by John killing her dog. Which is understandable. However, there were several obvious reasons why she shouldn’t or wouldn’t murder him at that moment she did.

1) Evelyn was abused by John throughout, yet only threatened to kill herself & she was type that accepts abuse. 2) John was strangling Vicki, so why not just let John murder & bury Vicki, instead of killing him at that moment? 3) Evelyn hated Vicki & had just tried to kill her with pills. 4) Evelyn had begged John to kill Vicki multiple times. 5) It defies logic that Evelyn would murder John & let Vicki walk out the front door, to then likely go to the police & report Evelyn for kidnapping, drugging, raping, assult & attempting to murder her, the murder of John, & being a lead suspect in the other girls disappearances.

At the very least, Evelyn should’ve let John finish Vicki, then kill him.