Plot – Spoilers:
The third and final part in the Human Centipede Trilogy brings together the lead actors from the two first Human Centipede flicks:
Dieter Laser as Bill Boss, an out of control prison warden who’s on the verge of insanity
Laurence Harvey as Dwight Butler, a subservient assistant to Bill Boss.

In Human Centipede 1, Dieter Laser for the most part was reserved and had a certain dignity to his presence. So when you’re first introduced to the loud almost camp Bill Boss, it takes a while getting used to. But once you’re done acclimatizing, Bill Boss is quite enjoyable as is Dwight Butler as his loyal and pathetically subservient helper.

In this third part, Butler is inspired by the first two parts and suggests to his boss that they implement the human centipede in their prison as a deterrent for nation-wide criminals as well as an expense buster. Boss is initially averse to any idea that isn’t his, but eventually agrees to meet with Director Tom Six and discuss implementing the centipede….

There are a few bits that drag and while Part 3 isn’t as depraved as Part 2, it’s a pretty good closing chapter to the poop Trilogy. Also felt the character of Bill Boss is a sort of shitty tribute to Col Kurtz from Apocalypse Now.

Favourite Scenes:
1. There are some new shocks including getting fucked in the kidney (not explicit), waterboarding with boiling water and of course the epic view of the monstrously gargantuan final centipede winding its way through the prison yard. But a truly ball-churning scene is included where Bill Boss castrates an inmate who’d mocked and threatened to rape him. If you are male with testicles that scene will most likely send a few quivers up your testicles even if you thought you’ve been desensitized by the most extreme ball-busting videos you could find on the internet.

2. After the first meeting with the Governor, as he leaves, Boss is feeling humiliated and launches into a “Fuck You” session while humping the door hilariously. 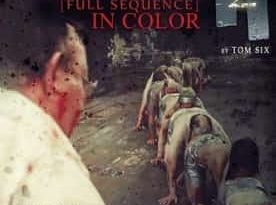 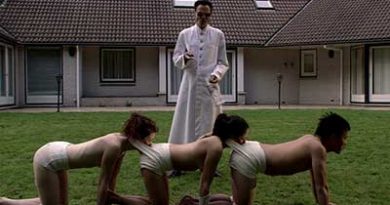 U are sick man

You’re right. None of us realized this. Thanks for pointing it out.

Have updated the video.

No problem brother! Hey, I filled out a form for a few requests. Ek Villain, American Psycho, and Shame. Did you get that request?

Just wanted to say great job on the site! You’ve got some really awesome movies here! Thanks for sharing ?

You Admin… I admire such attention to the comments…
Im not a pervert (or might I be..? Might we all are?)….

However, as someone who suffered some…. stuff… I like having an escape place to find some kind of visual “art”, movies, or just some shorts that can make me feel bad… but at the same time so efFedUp…

I really loved this one, the first Human Centipede is still my favorite but this one I really enjoyed too, the second one was okay, but I really liked this one and the first. Thank you for posting it!

For me, this was the most disturbing of all the Human Centipede movies because it was just so mean-spirited. In the second one, we can empathize with Martin, but this has no sympathetic characters at all.

this movie was so funny. I enjoyed it.

a cinematic masterpeice. i will watch this again and again and get harder every time

dwight and bill atleast had a very cute relationship

this shit was genuinely so fucking bad. bill is probably the most annoying movie character to ever exist. only good thing was the death-rape scene that turned out to not even be reality

Not my type of movie, for me is not funny at all, so diferent than the other ones…

boi do you need theraphy..

WOW, A FANTASTIC ENDING TO THIS SERIES. NOT AS REALISTIC (?) AS THE FIRST TWO, BUT CERTAINLY NOT WITHOUT MERITS OF IT’S OWN…. LASER’S OVER THE TOP ACTING MAKES IT A MUST SEE. FUNNY AND DISGUSTING AT THE SAME TIME. LOVED IT. THANKS AGAIN EFFED UP !!!!

This is my fav.part! I love the style of Tom Six btw,and Dieter Laser is a great actor!thank you for this movie Eum.

this series has become so self aware its just a comedy at this point, still enjoyable though.

That’s what I call Black Humor. Get back to the kitchen. Cheers Zed