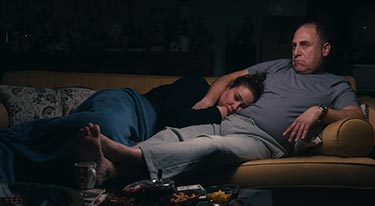 Plot – Spoilers:
That Lovely Girl is a brilliantly shocking effort in capturing the effects of continuous and consistent incest. Early into the movie, we see an old man having what seems like a fairly routine domestic relationship with his daughter Tammi (for some reason, you get it’s his daughter and not some young girlfriend). You are also forgiven for not suspecting something odd about the two sleeping in bed together.

The Dad appears a bit of a lech during his interaction with the waitress, but it’s the drive back that kicks in the incest angle. From here it’s downhill in terms of the details of their relationship. The Mom is either dead or gone, and it looks like Dad’s been fucking Tammi so long, she is now reconciled to their relationship and even in love with him and fiercely possessive. For an old guy who’s been banging his daughter for ages, the Dad sure has a massive sex drive and doesn’t let a day go by without getting it on, sometimes multiple times.

Tammi’s studies (if any) appear to have been discontinued. She doesn’t have any friends, doesn’t work, doesn’t do anything other than clean the house and cook, spending the day waiting for her Dad to return and fuck her as a reiteration that he still finds her attractive, despite her burgeoning size. She also seems wary of physical violence that always seems just around the corner. In short, she’s a well-trained sex slave/maid/emotional dumpster for her Dad.

Every time she steps out, you are sort of rooting for her to maybe bump into someone and make a new friend outside of the shithole she lives in. The one time she leaves home feeling truly hurt and seemingly open to finding a new life, she ends up allowing herself to get gangbanged by a bunch of beach bums.

There is some brief respite when she finds kindness and pot in an older woman she meets at the beach, but this too, appears to have foundations in the lesbianish woman’s attraction towards her.

Favourite Scenes:
1. The first time you’re introduced to the bizarre nature of their incestuous relationship is when the Dad decides to sleep on the couch one night having just fucked Tammi earlier in the day. His decision leaves her looking rejected and the next morning she asks if he’s having an affair. In response, she gets fucked as a reward and reiteration of his interest in her, or perhaps, as punishment.

Punishment in the Dad’s world includes a few knocks to the head and fucking her in the ass. Both of these appear to take place here, so not sure whether the fuck was reiteration or punishment. The scene is further heightened in its misery when Tammi steps out humiliated and is greeted by an oblivious neighbour lady who even enquires after the Dad.