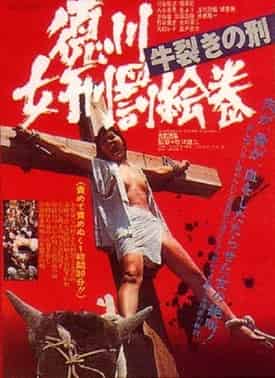 Plot – Spoilers:
Shogun’s Sadism is set during the Shogun Era in Japan and has two stories from the 1600s and 1800s. In the first story, Sasaki a samurai falls in love with Toyo, a woman he later discovers to be Christian. This was in a time-period when Christians were persecuted in Japan. Sasaki’s master and feudal lord is a sadist and proceeds to torment the couple brutally.

Shogun’s Sadism doesn’t let up on the torture. The movie opens with a woman being boiled in a cauldron and the torture just goes on and on. In the second story about a petty conman who falls in love with a prostitute, dark comedic elements are introduced to complement the torture and induce a few chuckles.

Shogun’s Sadism was marketed as The Joy of Torture 2 and aptly lives up to its title. Scenes include, a pilloried man’s head sawn off, a woman ripped apart by a couple of bulls, forced abortion and sexual torture involving a couple of dogs.

holy shit that lady was in there with REAL snakes

what did i just watch

i liked the main character, its sad he had to suffer and die in the end. Nice movie btw

Why penetration scenes were censored ? This is not YouTube channel…… censorship is not accepted here. Beside that this was a real sick movie.

Absolutely amazing!!!! loved it. perfect for this site.

That was a really good film, honestly though it reminded me of anime movies like ninja scroll. I enjoyed how they unraveled each story.

Wow, very interesting movie and fucked up scenes (except the one with the puppies, that was silly), the most disturbing thing for me is that I already found on the internet that most of the sick torture stuff showed on the movie was common on ancient japan.

I’m a sucker for Asian films and this is a good little 70’s Japanese film. Considering its age the effects are very well done. 3.5/5 Ox