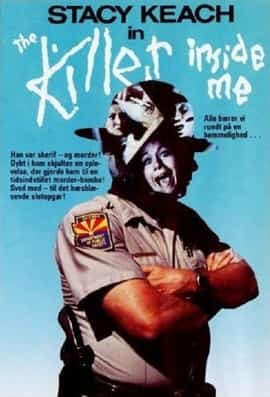 Plot – Spoilers:
Based on the Jim Thompson novel, The Killer Inside Me (1976) was its first film adaptation.

Set in a mining town in Montana, this is mostly about the disintegration of Deputy Lou Ford. Lou is the good guy in town. He doesn’t carry a gun or find the need to flex his power to lay down the law. He’s got a respectable background behind him – parents were college teachers – and he’s also popular among the guys who’ve found themselves unfortunately hedged on the wrong side of the law. The sight of Lou still going steady with his childhood sweetheart completes the picture-perfect role model.

But there’s a murkier side to Lou that’s begun to surface of late. He’s always been worldly-smart enough to pretend to be a man of principles, while flirting with the powerful and shadier folk in town. And now the stress of pleasing both sides of his personality, coupled with childhood trauma starts to unleash a more violent side.

Lou puts it best when he says, “I got my feet on both sides of the fence. I can’t move either way. All I can do is wait, until I split right down the middle.”

Yes, we will be adding the more violent 2010 version.