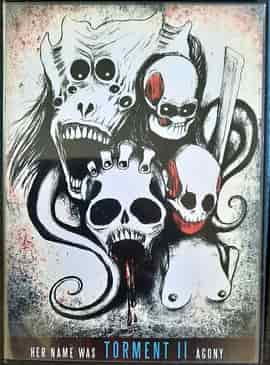 Plot – Spoilers:
Continuing on from Her Name Was Torment 1, the memories of the victims are stronger with this one. And in more graphic detail.

And when Sister wasn’t around, Torment killed the loneliness fucking the skeleton of her dead lover or by indulging in some genital mutilation and head battering.

And with that, the movie’s done in less than an hour. An hour well-spent for most. 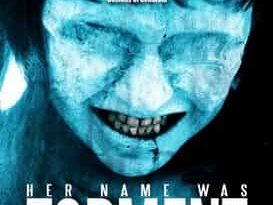 More of the same, except the gore and torture has been amped up a bit and two killers instead of one. Quite well done for a low budget movie imo, it also ends in a way that suggests some sequels to come. Cheers EUM guys, a nice addition to this site.

Thank you so much for adding this movie!!

Pretty good! Tho, when she cut off the mans nipple; it had me squeamish.

sisters r doing it for themselves

I wonder the make up fx….they were good being low budget movie

Typical no thought gore fest. It’ll get the edgy teens hard but for the most part forgettable.

The interview technique works well and builds tension and drama up wonderfully.. a part three is available I believe ..

LOVED THE PART WHERE THEY SHAT.

need more shit. oh my god. i can’t take it. im up all night unable to sleep because everytime i close my eyes, i see brown. i need to watch this movie again. i am in love with shit.

I thought that this movie was about violence against man, not also against women.. Very violent movie anyway.

Such great gore and effects and interesting characters but the acting is so horrendous. 3.25/5

A step up from the first film across the board (and maybe the budget increased for the second film?). Better cinematography, better special effects, greater amount of jumper potatoes, and the interview tapes were more revealing and became mysterious at the end. Again, use of colour and B&W was well done. I look forward to seeing part 3. This film is (imo) a very strong 3.5/5 toothbrushes

By the way tongues (sheep or cow) are delicious if you cook the properly. All you need to do is clean the, put them in slow cooker over night with chopped onion, salt and sinemon. Sinemon will take the bitter taste out of it but don’t drink the juice in the end.

all gore and naked girls no story at all the part that got me was when she cut the clit off ….this movie was a waste of time but I am not into this shit