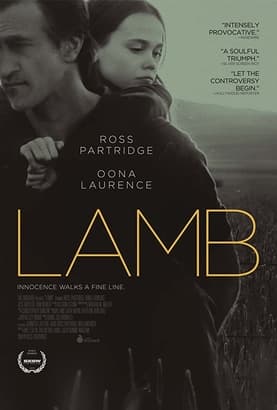 Plot – Spoilers:
Lamb isn’t able to hold down his job and the death of his father leaves him uncertain about what’s next. He feels unworthy of the affections of a younger work colleague and is getting ready to drift through his days, when he meets eleven year-old Tommie at a mall’s parking lot. He alternates between giving her life-tips and exhibiting bizarre behaviour like pretending to abduct her. And yet, his general demeanor is nice enough and Tommie’s life drab enough for her to start enjoying his company. So when he invites her on a long trip to his remote country home, she readily agrees, even though he gives her a new name Emily, and instructions to pretend to be father and daughter in case they’re stopped.

Thoughts – Massive Spoilers:
For the longest time, you’re left confused about Lamb and even Tommie. What do either want out of this. But with Lamb as the grownup, your attention is more on him as the narrative continually confuses you into handing him the benefit of doubt.

The whole house-in-the-middle-of-nowhere seems like Lamb trying to isolate himself and Tommie from the judging eyes of the world – if no one were around, it would be idyllic because he then wouldn’t be forced to confront his guilt.

Lamb himself is most likely a victim of abuse, going by the story he tells of his brother sleeping outside of their home. Unless, this was just a made-up story like the others he came up with.

Could think of three possibilities of Lamb’s intentions:
1. He’s in a bad space and recognizes a similar soul in Tommie, and thinks she’s at an age where there’s still hope to steer her out of her inevitably empty future. A sort of Holden Caulfield trying to help her in an unconventional way.

2. The above assumes no physical intimacy between the two. Then there’s the thought that Lamb was taking it as it went – trying to see if he could groom Tommie into a consensual relationship. Like when he asked her to mess up the hotel room so it would feel like she was inviting him into her room.

He probably jogged down this path until the incident where he spilled a drink on her and she hysterically yelled at him to Go away. Her hysteria was probably itself a reaction to sensing for the first time, something sinister in him. In any case, this probably shook him out of the convenient reverie he had allowed himself to slip into, and turned on the slow drip of guilt.

3. Despite all the talk and outward facade, Lamb actually got physical with Tommie – the bits where she says her stomach hurts and even throws up, could be more than simple reactions to their lifestyle and the arrival of Linny.

Didn’t get this garbage at all, load of shit!

You say that as if August Underground isn’t a good movie by any means. Yeah, it’s an exploitation film, but when you watch the film from the angle the director was trying to take it after watching the interviews with Fred Vogel, it’s actually extremely brilliant. Fred Vogel himself said that those movies were made with the intention of bringing to light the true nature of the serial killer: no “woke” justifications, no romanticism of violent ideals, no victim blaming, no glorification, and definitely no defined purpose for the brutality. It’s a raw and unflinching sucker punch to the gut, and what makes it so brutal isn’t the blood, gore, and death, but the fact that there is no outright reason for it other than the main characters just felt like doing it for fun. The ultra-realism of every irrelevant conversation and their overall portrayal of the characters feels so natural and real that it truly takes you into their bizarre and amoral world. Say what you will about August Underground being “high” or “low” art, but I think that it’s a brilliant piece of social commentary about our society’s obsession with serial killers in its own, unique way. Granted, however, I will only say that about the first one in the trilogy. The other two movies are just sensationalized trash.

Shockingly good film. By the end I wasn’t sure if he fully groomed her and he knew she was pregnant, or father figure

??? I am not really entirely understanding this film. Kind of confusing at times. But still thanks for showing this film EUM. Love this website!

Beautifully made film, but unfortunately the close-minded puritans of the world will condemn it without even seeing it. There’s nothing shocking in the movie, at worst its uncomfortable. But the ending made me cry so hard, because these characters are so well-rounded and the performances are amazing.

Obviously there is a lot that happened to Lamb off-screen, I feel these are subtle indications to his true character. Lamb isn’t a child molester, I think he was just desperate to be a father to someone.

I agree with you. I often cover these kinds of fests though and usually, the critics and audiences aren’t crazy about challenging movies. There’s always a lot of repetitive pandering. Anyway, I do wanna point out I do think he was aiming to form a deep relationship with her no matter what, and I think if he could have made it happen organically, he at least subconsciously thought of it. And that’s something that predators ALWAYS do is they have to convince themselves they’re not doing any evil while they’re doing it in order to be convincing. But ever since the first time they met from the last glance he was grooming her, for sure. No man wanting to father a child would isolate her and brainwash her into doing only what he says and admitting all her thoughts and feelings to him whenever she was having them, especially knowing how easy it is for him to control people (by his own admittance). The amount of times he reinforced his “rules” to her makes it obvious in the end, but I’m with you that he almost tricked me in the beginning that he literally wasn’t about to kidnap her.

Lamb is not a bad guy. He’s not a cho-mo or a kidnapper. But the death of his father really rattled his cage. He’s 40+ years old, somewhat of a loser, confirmed by his employer stating how he really fucked things up, a rapidly fading party animal, again confirmed by his nothing more then sexual relationship with a much younger co-worker, and he’s coming to grips that life is passing him by. Enter Tommie who give him the an opportunity to be a mentor and father-figure to the child who desperately needs of this type of caring relationship. This is a much deeper, soul-stabbing movie that gently pokes at life’s missed opportunities we all have. Bravo, EUM….. Bravo!

He kept saying stuff like he wanted to be “tested” and how easy for him it is to manipulate people. He’s a Humbert Humbert who was testing the waters. Personally I think he’s a bad person who realized in order to keep on living with himself he needed someone to need him–what else than a child he chose specifically, a lonely, young girl. He started grooming her from the very beginning until the very end. He was deluded in thinking that he could give her anything without in the meantime taking everything. He left her with his claws still in her and, whether he meant to or not, did everything he could to ensure she would not forget him, even letting himself be uncharacteristically vulnerable around her, reinforcing trust, isolating her from other people, and that they shared a “love.” He’s fucked up. He doesn’t mean to do bad but he still does it in his own way. Anyway sorry, just another take.

Honestly one of the most disgusting films about pedo manipulation of an 11 year old girl I have ever seen. Most people who have commented seemed to have missed the point. It starts out with Gary/David/whatever his real name is’s wife Cathy leaving him (must have found out he was a pedo). Then we get introduced to his 21 year old blonde girlfriend who he has probably been banging since she was 11 but she is too old for him now. The last tear filled scene in the car gives away that he has been banging 11 year old Tommie for at least a week, without the graphic sexual depictions displayed on the screen. Really twisted and sick film if you ask me. Bravo! Well done! 4 out of 5. Effed up for sure. Well acted too, especially Oona Lawrence – a very sophisticated performance for such a young actress.

I was hoping this was ”Dr Lamb” film, and then being disappointed that it wasnt. Oh well.

Really hated this because it gave pedo vibes.

No one gives me bigger pedo vibes than guys like you

What a fantastic movie, that is so hard to describe without spoiling. It’s honestly kind of crazy how it manages to reel you into the intensity of the relationship with a lot of nuance and complexity. It was terrifying, watching how easy it was for this one man to indoctrinate others into his orbit and manipulate them, but also refreshing for it being a selfish, empty, sad, lonely man to even attempt some sort of reflection and question his humanity. Honestly, what great characters and performances. Lamb is a scary, quietly powerful man who is somehow able to speak deeply about what he wants specifically while still being vague enough to forfeit relationships, conversations, and interactions, and what happens to that little girl feels so real. The whole thing is realistically just a creepy, fucked-up situation and (SEMI-SPOILER) it’s sad knowing how much power he’s going to have over her in the long run, especially concerning her situation. She’s going to grow up hung up over people who aren’t him. He fucked with her head to make them out to be the heroes of the story rather than two people in a pre-conceived scheme to (supposedly) emotionally validate themselves. Holy shit. Nice.

So Goodfellas is comparable to Lolita because it had narration? the fuck are you on about??

Did you pedopervs learn any new tricks from this?

I think you will find that Facebook is the go to site for groomers. I expect tik-tok is not far behind. Twitter contains thousands of child-porn accounts. Yet I expect you have plenty of friends on social media and you may be enjoying the company of pedo-pervs and think they are jolly-good-chaps.

I’m aware of that, and that’s why I no longer use social media other than YT and this comment section.