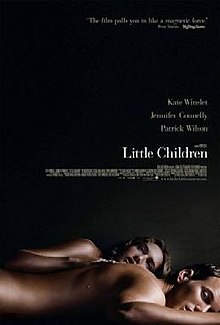 Plot – Spoilers:
Little Children is a collection of miserable characters whose interactions with each other breathes life into a stagnant suburb in Boston. Sarah (Kate Winslet) is the mother of a 3 year old girl who harbored ambitions of writing and even has a degree in Literature until marriage and the kid got in the way of her doctorate. She has zero connection with her husband, a branding consultant, who prefers to cloister himself in his room upstairs watching some B-grade pornography that gets his rocks off intensely. Even by 2006 standards, the stuff he’s so turned on by makes you wonder how poor his internet skills must be 🙂

Sarah hangs around a park and is kind of distant from her daughter while attempting to make polite conversation with the small-minded women there whose only claim to being alive is gossip. Into this boring and suffocating world arrives the good looking Brad (Patrick Wilson) who’s resigned to being a bar-exam failing loser, bossed around by his documentary filmmaker wife Kathy (Jennifer Connelly).

While Sarah and Brad find kinship in each other’s company, the small community they live in is disturbed by the arrival of a pedophile, Ronnie, who has served his sentence and decided to shack up at his mother’s place.

By the end of the movie, most of the characters find their misery alleviated in some way or the other.

Larry, the ex-cop who took out his frustrations of not being on the force anymore by bullying Ronnie, gets a chance at redemption.

Ronnie chops off his cock ensuring he will never be able to molest another kid.

Kathy rediscovers the value of Brad once she realizes she’s on her way to losing him.

Brad through his skateboarding accident figures his affair with Sarah was merely a way to feel alive again and that sport could easily replace Sarah effectively.

In all of this, Sarah appears to come off the worst. While she seems to accept her married fate, the key is that it is acceptance, not some kind of epiphany. You can almost imagine that the rest of her life will be one slow dimming away of the fire that was briefly lit.

Favourite Scenes (Massive Spoilers):
1. After Sarah buys a new red bathing suit, she wears it to the pool hoping to meet Brad there. As she walks out of the changing room and notices Brad, she lets out a small gasp and is filled with a happiness that was missing until that very moment.

2. Ronnie’s interactions with his mother.
Unlike the rest of the world, Ronnie’s mom only sees her child and not a pedophile and sincerely believes that Ronnie can be cured if he finds a girlfriend. The scene where she lists out his attributes to put in a dating column advert is tragically comical and briefly humanizes Ronnie. There is also the simple note she writes him before her death that sends Ronnie into a tailspin of guilt and misery. 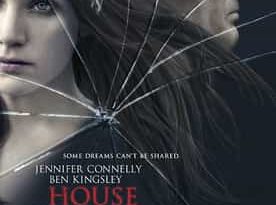 very good movie, we should be happy in what given us is the lesson of this movie

Women who give up their carries for the sake of having a child are petty losers.

People with kids are so miserable lmao I pass