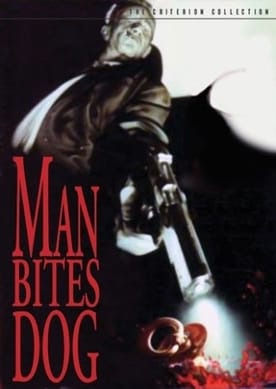 Plot – Spoilers:
Benoit, a vastly experienced serial killer, is on camera pontificating on his choice of victims, disposal of bodies and in general, on all that is wrong with the world and his town. The film crew are a bunch of documentary makers on a shoestring budget out to record his work and thoughts, as they follow him around.

Man Bites Dog is a masterpiece in the mockumentary genre and explores the effects of a subject on a film-crew, as they progressively get more involved in Benoit’s world and are unable to stay objective and behind the lens.

Benoit is sharp, alert and dips into his ridiculously vast experience while he’s at work. At other times, he puts on a cocky and intimidating front while unwittingly revealing his insecurities, loneliness and myriad complexes. And all this is down to the skills of Benoit Poelvoorde who IS Benoit for all we could know.

Man Bites Dog douses the grim nature of its subject with dark comedy – I mean, it’s not often you burst out laughing when an old lady is frightened into a heart attack.

Great movie! One of the best movies I’ve ever seen!
And ending is magnificent, completely unexpected!

I’m surprised this movie doesn’t have more ratings/comments, it’s one of the best films I’ve seen on this website. Unlike your usual grindhouse trash I actually got a lot out of this film. Would definitely recommend.

This film got a load of controversy when it came out but (as is often the case) I don’t really see what all the fuss is about. I’ve seen far more graphic rape and violence in movies released in the 1980s, 1970s and even the 1960s. Maybe because it’s comedic in this case, it’s seen as less moral?

Thanks for the upload, this is one of those pesky foreign films that’s damn hard to find with subtitles. And me being an uncultured Brit, English is the only language I speak.

It was contained murder, rape and some physical violence but the interesting point was none of them was pictured in a violent way.