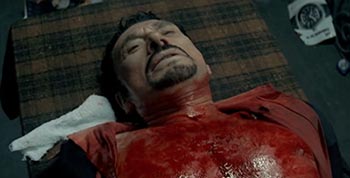 Plot – Spoilers:
Set in Macau, a French woman married to a Chinese auditor is shot in what looks like a hit job. Her husband and two children are murdered but she manages to survive, but is critical. Her father, Francis Costello (Johnny Hallyday), arrives in Macau and vows vengeance because the local police have all but given up.

At the outset, one thing that strikes you is the weirdness in the appearance of the father-daughter duo. Their eyes are really strange though this has no significance on the plot 🙂

Anyway, Daddy Costello happens to be witness to the murder of a crime boss’s wife who was busy getting humped by her lover. Costello gets in touch with the hitmen who kill her and asks them to help solve his daughter’s case and also exact revenge. He offers them all his savings, a costly watch and his house and restaurant in Paris where he worked as a chef. As it turns out, Costello is a former assassin retired for 20 years and he and his new friends embark on a sequence of spectacular gunfights in their quest for revenge.

Favorite Scenes:
1. Towards the end, when the pregnant lady seduces the crime boss while he’s lunching.
His crude and clumsy attempts at impressing her are comical and entertaining.

2. The ending scene for being Truly WTF. The weird laughter Costello shares with the kids. Who are all those kids? What’s with that lady delivering all those kids and still looking sexy despite having popped so many out?

I want to watch this but there is no subtitle.

Not sure why this movie is on this site. I guess this is effedup for some segment of movie watchers(?).

Want to watch but need subtitles.

i understand a little french and english is my first languge, but i dont understand any chineses.

HEY ADMINS!!! Since I notice a current trend of ‘fixing’ subtitles w various titles that already have subs on this site, how about before u do that, ADDING subtitles to films here that don’t even have any, let alone r in 3 languages, like this one for example. Would really appreciate it;) I’m sure there r other titles on this site too that r like this that need em n don’t have any, there was a Marian Dora one, and one other I think but can’t remember the name to, just off the top of my head. Thanks?

Didn’t realize initially this was directed by Johnnie To, I’ve seen a few other of his films, good stuff. Overall I enjoyed this film. Loved the music especially, it gave the overall film a very neo-western feel, esp the park shootout. Also liked how the 3 hitmen stayed by Costello’s side, I guess u could say chose to be honor-bound bc they were hired by him.

Overall, good acting, plot, cinematography was good n had some very diverse locations too, soundtrack (again, especially), and pacing, with almost no dull moments. The film had quite a few cliché af aspects, including all the hitmen ending up working for the same boss, the sudden memory loss, the cousin dying the instant he’s rescued but not before he tells em where all the guns r, etc. Funny how he hid em all too. Sidenote: that AUG was laughably fake btw (big fan of Steyr irl). Ending was kinda happy /cringey n very cliché too, but didn’t really detract from anything I feel like. Call it another stereotypical action film ending, pushing positive vibes/reunions so many other action films end with. Costello’s eyes reminded me of an old husky’s eyes btw, lol.

Simon Yam(mob boss) is also one of my favorite Chinese (HK) actors, every time I see him I think of him as the King of Killers from the film Hitman(aka Contract Killer, personal fav). If u like films like this one, b sure to check him out in that one, and also SPL (aka kill zone, another fav), and PTU (another good one, also by this same director) as well, bc chances r you’ll really enjoy em if u liked this film.

Sorry but this is bad, the acting is so wooden and ridiculous

Although it calls Vengeance but it is not part of Vengeance trilogy, however nice movie to watch.