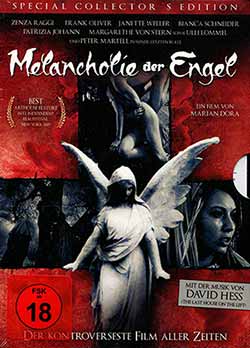 No subs on this extended cut. The regular cut has English subs and is of a slightly better quality. Can be watched here: Melancholie der Engel

Plot – Spoilers:
No subs here. So if you want to follow the dialogue, maybe watch the original cut (Melancholie der Engel) and then this.

The six minutes extra here include:
A massive yolky egg cracked open.
More insect eating.
Extra pissing and chugging it down like beer.
Some more conversations.
The finale is more violent, gruesome and includes intercut scenes of the pregnant lady and a fetus. 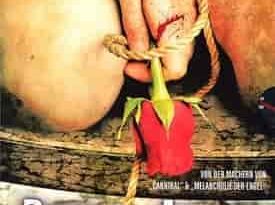 Odd.. every blu and dvd version of this extended cut has English subs..

If we got this off even a DVD, the quality would be better 🙂

bro love you for being antinatalist, that’s epic, but you can simply put both versions effedup uploaded and go with it like that. Especially if you’ve seen it already, you can now experience it in the most pure form, even if you’re not a fluent german speaker

I’m not really complaining.. I have the physical copies.. so yeah.. I’m good. 😉

thank you very much for the extended cut in german!
iam for germany :)))

Gets better mit every view.
Why these scenes were cut or edited I’m not sure ..
Yes the videotape of the abortion seemed longer and definitely more gory. I prefer it without the subs as it’s native language and not reading can help one focus on the art. And make no mistake… This is fine high art indeed. Ich liebe dich.

Pretentious, boring and so badly acted and produced that doesn’t achieve its only objective: shock for the sake of it. Don’t waste your time with this crap!

You watched a different movie mate, maybe it would be better if you stopped watching art in general, something more casual and mainstream would suit you, go back to watching saw movies.

No, he’s right (except for the acting, I thought they did a good job with that). I’ve seen plenty of artsy fartsy films on this site, and this one is trash in every regard except for acting and production value. There is no real message to be taken out of it; I’ve watched this movie several times (cut and uncut), and nothing about it makes any sense.

Plotless movies can work if they’re trying to say something significant, but the only thing of significance about this film is its shock value. What kind of message or important motif did you get when they tortured and murdered basically everyone (including a kitten, mind you)? Is it that bad people do bad things? Is it that the world is cruel and nihilistic? These two things are such basic knowledge that making movies centered around those themes is banal at best. What was the deeper purpose of those random conversations? They speak a lot about “pain claiming the soul more than pleasure,” but, like nihilism and cruelty, it’s so commonplace that saying something of that ilk really doesn’t mean anything or matter in the slightest.

Take a film like “Thanatamorphose,” for example. It’s fairly low budget and the acting is pretty bad at times, but it actually does at least have a theme going for it. It’s an allegory for the rapid deterioration of mental health and how severe it can get when left untreated. This is done through a woman who literally decomposes while alive. Say what you may about the plot, special effects, and production value: while that film didn’t really have a direct “message,” it did have some sort of significant impact because it actually has a tangible theme.

“Subconscious Cruelty” is another artsier example of having a proper motif. All of the shorts in the film are centered around sexuality and barbarism, but each of the shorts, while all bizarre, at least have some sort of tangible plot (with the exception for “Ovarian Eye,” I think that’s more of the introductory piece to set the tone for the rest of the film). It definitely flounders in terms of what it’s trying to say (as it is an anthology film), but there are at least some clear messages you can deduce from some of them. The “Rebirth” short in that film, as far as my interpretation of it goes, is that if you fuck with nature, it will fuck you back. There are admittedly some other less tangible messages that can be decoded upon several viewings, but this film (lazily enough, I admit) admits that it’s meant to be viewed as an intense fever dream.

Like I asked earlier: what did you get out of this film that makes it high art? Good camera work, acting, music, and special effects can only take you so far if you have nothing of value to say.

Sorry if I have the discernment of knowing when a movie is made for retards like you. You are the one that should go after some proper subversive movies instead of thinking any “underground” shit like that is proper…

Utterly boring drivel. Shock for the sake of shock. There is absolutely nothing of artistic merit to be found here.