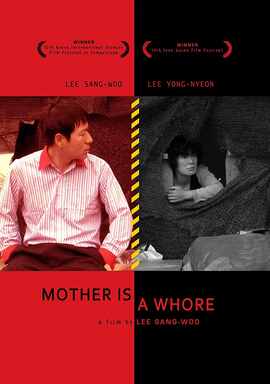 Plot – Spoilers:
In rural South Korea, Sang-woo runs a service for lonely, frustrated men and even the disabled. He pimps his mother out to them. Sang-woo even puts out flyers advertising her as the cheapest whore in Korea. The old lady is enthusiastic in her job and has a bunch of regulars who finance the mother-son’s favorite pork and beef treats.

Sang-woo’s father is a middle-class family man living in a nearby town, whose step-son hides away in his room refusing to step out and whose step-daughter hates him though she has a thing for the brash Sang-woo. There’s also a gay teenager who keeps following Sang-woo around.

The facade around all the characters is soon stripped away with the highlight being the complex relationship between Sang-woo and his mother. It’s clear that he hates himself for the job he’s putting her through, though she claims she enjoys it and does it to kill the loneliness. It’s also suggested that he is HIV+ and it almost feels like Sang-woo’s mother sees the rest of her life as only focused on earning for him as a biological commitment. The relationship between the two, wins the film its Misery-Depressing category and director Lee Sang-woo (who also plays the lead), seems to have imbibed the gift of a deep understanding of miserable people from working as Kim Ki-duk’s assistant.

I could imagine someone like Elliot Spencer pumping his poor excuse for a cock into an old stinking whore, he’d still have to pay her too because other hookers would just laugh in his face

finally a film title that i can relate to

I can’t believe this is a thing I’m about to write. This has the most beautiful ass rape I have ever seen. From the Spanish guitar to the dichotomy of what’s happening on screen between the church group and the teenager all the way down to the poster of the face watching it.

Oh look a movie about your mom.

I actually liked this film. It’s a bit melancholy, to say the least, but I thought it was decently put together.

This was poignant, the dismal tenebrous settings and regenerative fiscal climate were portrayed with bleak earnest artistry.

My apologies @ Admin, I hadn’t shared my profile correctly with Gravatar.

“Normal”? You mean median and unexceptional like you Ben, so allow me to persiflage your puerility. You’re superseded little one.

everyone gets raped lol

i like the gay kid. i smiled whenever he was on screen 🙂 my favourite part is when he beat the shit outta sang-woo and fucked up.