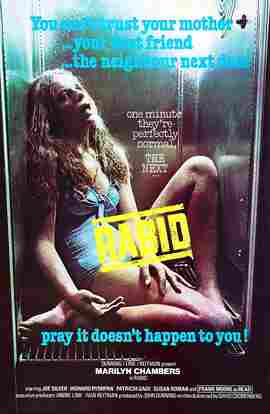 Plot – Spoilers:
A couple in a bike accident are taken to the nearby Keloid clinic that specializes in grafts of the dodgy sort, and which also attracts people obsessed with their appearance and who end up looking weird.

The guy from the accident gets off easy with a pin in his shoulder and is able to maintain his pre-accident stoned gaze (until the climax where he cracks quite hilariously). The woman though is in a coma and undergoes some experimental grafting that leaves her rabid. Like the disease. She’s got this thing poking out of her armpit that she uses to jab her disease into mostly horny men, and soon, the whole town is rabid, biting each other. The disease also works like a drug and has withdrawal symptoms, though the carriers seem to have a semblance of control over whom they choose to munch on. 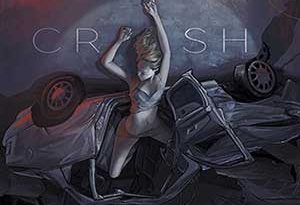 Cronenberg, the master of medical horror films and the creator of movies such as ” Shivers ” and a whole series of ” Scanners ” films in the 70s and 80s has come up with this classic that was remade a couple of years ago, by the Soska Sisters, which I watched awhile back. It was ok but not up to the standard of the original.