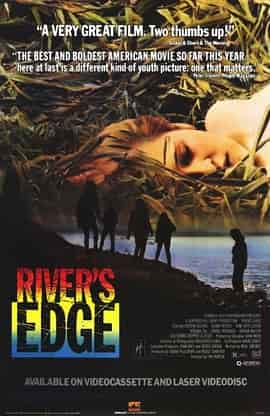 Plot – Spoilers:
Samson strangles his girlfriend and leaves her body by the river. He then brags about it to his friends at school and takes them to the new tourist spot. The friends aren’t sure how to react and spend the next few days confused about their feelings and mostly quiet. One of them though is hot on the situation and as the self-appointed leader of the group, takes it upon himself to bundle Samson away from the law.

River’s Edge is a quiet and powerful portrayal of shared numbness among disparate, yet interesting characters. There’s Feck, the one-legged local dealer who kills his loneliness with a blowup doll. He carries intimidating stories from his past, but feels inadequate in the presence of Samson’s boisterous psychopathy. In Tim, there’s the searing resentment of a kid’s ambitious growth hormones stunted by the body they’re festering in. And of course, Layne – memorably played by Crispin Glover – who thinks he’s part of some kind of novel or movie.

In River’s Edge, the adults are obsessed with why the kids aren’t reacting the way they would. What gets everyone is the lack of obviously-displayed empathy, which is probably something users of this site would identify with – now, or from a past phase.

Requests are not allowed in the comment section. This is the CRP (comment request police)
…Thank you for your future cooperation.

Entertaining enough.. But.. some really bad acting.. poor use of music in spots.. seems poorly made in ways. Crispy Glover acts basically like he dis as Mcfly… apparently that’s how he always acts? The same weird expressive way he talks and even moves

neither can you lol

Nice gritty movie and the performances from Crispin Glover and Dennis Hopper make it!

“stay in school cause it’s the best”

chorus (all together) stay in school cause it’s the best

STAY IN SCHOOL ‘CAUSE IT’S THE BEST!!

This is amazing, but mainly when Keanu says “All you do is eat our food and fuck our mom!”.. A classic!

Ok I like Effup. but this movie was stupid.

Viewed this many years ago, it makes so much more sense now I’m older. Certainly recommended.

# Valkyrie Matisse, I saw it when it first came out on VHS, it was ok but, meh, forgettable. The only good thing about it was Dennis Hopper, he is an awesome actor, loved him in ”Blue Velvet”, a classic performance in one of my favourite films. Classic and favourite just as you are. Zedxx.

that kid really be talking about his fucked up childhood at the age of 9 that’s toddlerhood.wait a second,there’s no way on earth that she had nails like that while living and they can’t grow after death.????sus.also that beanie,dressed in black dude is totally gay.the fat Fred Vogel lookin Brian Baumgartner lookin John Krasinski lookin Jason Segel lookin guy and beanie guy exchanged scripts and hoped no one would notice.MY GUY beanie guy threw the dead bitch in the river and hoped she would sink?????????????.IT ROLLED AHAHAHAHAHAHA.funny guy.if you get arrested do not admit alright?do not do it ever,regardless of… Read more »

why do i have to redo the typing when i drop my ipad on myself?honest question.send help i’m having a psychic episode

Bc youre a psycho, your ranting proves it. Go seek help, lol.

i see you liked your own comment,cool and also cute ???? thanks zeddy,will try my best ☺️

Someone liked your comment too bc now u sound almost normal. Btw, is ”Ruby Rain” your name or does it mean something else, like a ” menstrual shower ” ? And no, Im not psychotic. Just making conversation. Cheers!

it’s not my name,i like red and i like rain :)))).ofc i sound almost normal i’ve been reading about how to improve my mental health in just 10 days!and it works!! or? ????