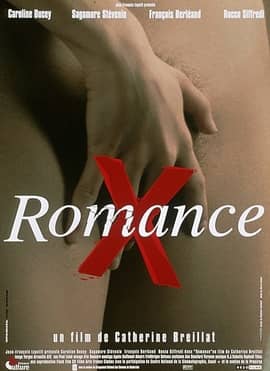 Plot – Spoilers:
A woman (apparently called Marie) resents the space her boyfriend forces between them. He isn’t keen on sex with her and might even be gay. She doesn’t suspect this though and withdraws further into self-loathing. Is she hyper-sexual or just sexually malnourished?

Director Catherine Breillat is the queen of intellectualizing sexuality. So don’t be too disappointed with yourself if you find yourself thinking, “Will this woman ever shut the fuck up” every time Marie engages in a sexual endeavour.

What begins as regular sex with a guy she picked up at a cafe, soon morphs into self-degradation as Marie tries her best to turn into an intellectualized cumdumpster. But instead, she ends up finding her zone. 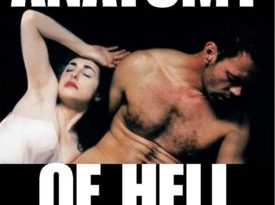 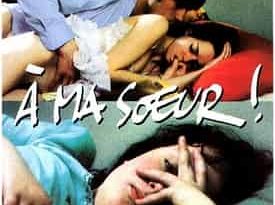 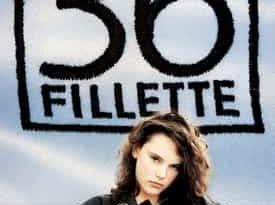 Hey admin,
You’ve outdone yourself this time !
Watching Romance X made me feel like
someone dipped me in used cooking oil.

I like Catherine Breillat as a director on a par with the plague – on second thoughts, prefer the plague.

dammmm. look how hairy that thing is 😀

Thanks admin,
Romance X made me feel nasty.

Well that was something.

WARNING: This review contains huge spoilers! I have intentionally spaced them out from the body of the review & placed them at the bottom in order to prevent said spoilers from jumping out of nowhere.

Well, I guess I can’t complain too much since I did go into this movie with both eyes wide open, knowing that it was gonna be possessed of a gynocentric perspective & strapped myself in for the full ride. But I was holding out some small modicum of hope that this wouldn’t be another piece of sappy, mellow dramatic, poorly reasoned, intellectually disingenuous, anti-male horseshit. But regrettably, today’s feminists deserve a big A+++ for rabid consistency! Never failing to disappoint.

Poor little Marie takes an introspective journey into her own limited understanding of Hunan sexuality because of her lack of sexual fulfillment. Taking very little responsibility for her own actions, she stays with a tiny dick prude that has about as much interest in fucking her as a castrated Panda would, but she stays just the same (In all fairness, people do fall in love with the wrong people for the wrong reasons & the emotion of love & it’s accompanying loyalty are not like water from a faucet that can be turned on & off at will).

Nevertheless she does stay with the idiot prude with the centimeter peter & fucks around on him (can’t fault her for that either!) But with every sexual encounter, the message that her sexual naïveté is made worse by every guy she’s intimate with unfolds. Until it finally culminates in the only “Wise, empowering decision” her introspection turned self righteousness can make. *SPOILERS*…

Kill Mr pickel dick because he knocked her up in a very unfulfilling night of (Barely) fucking.

Yep, that’s what you do when you’re a girl with blue balls (Pink Ovaries?) & end up with his baby instead of the world’s greatest climax…Kill the sexually worthless sonvabitch!

Be sure to turn on the gas & shoot a cold, calculating glance at the fucking cat to see if your plan is working as it starts to close it’s eyes forever…Fucking cunt!

Bondage scenes are amateurish & boorish at best. Sloppy & dangerous at least. Trendy, Pulp Fiction style Rubber ball gags without holes in them for your sub to drool out backed up sinus fluids they could (and have) choked to death on are a really dumb idea! Save that shit for the Hot topic posers. It’s also pretty dumb for the character (A Dominant that is only a little older than me & portrayed as having as much experience as his years would suggest) to leave a bound sub for even a minute by herself to get a chair that should have already been there as part of the scene (Just what kind of Queen shit Sexologist is this director supposed to be with dumb scenes like that in her movie!?)

So to summarise, had this movie truly been about the struggles of a sexually repressed, guilt ridden Woman (The kind you see in the mental health field walk into the hospital caked in dirt & shit that they’ve smeared on themselves because their choices made them feel unnecessarily dirty). I would have felt sympathy for the protagonist. But it’s not, it just postures like it is. Which is really tragic indeed!

Caroline Ducey is boney & barely boobied (What other kind of breasts would a feminist cast!) But she’s cute & does play a pretty good subbie. So just stick around for the unstimulated sex or pass on this cinematic tapestry to misandry altogether.

Good film, and it makes me glad I’m not a French beta male.

The ending…ok this was an interesting movie…don’t know what to make of it.

Can you hug me now

Love how angry the comments come across as everytime a movie about sex gets uploaded lmfao, never thought this site would become a dumping ground for raging incels