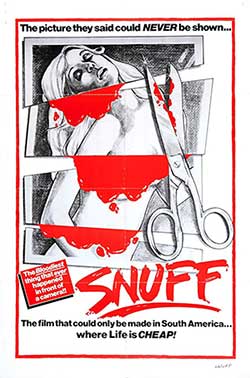 Plot – Spoilers:
Though a terrible film, Snuff has its place in the annals of fucked up movies because it popularized the craze for real snuff movies. Prior to it, the term existed, and while there were news articles about the concept, no movie attempted to really tackle the idea of a snuff movie.

Snuff was originally a movie called Slaughter shot in Argentina which died a quiet death quite deservedly, as it was just another badly made low-budget movie. A few years later, a producer who now owned the rights, decided to add in a scene at the end where the alleged director of Snuff, after shooting the final scene, kills an actress with the help of his crew. This was then given some fake marketing as a real snuff movie and a legend was born.

Plot-wise Snuff is disjointed and centers around an actress Terry who’s cheating on her producer boyfriend with some rich businessman’s son, Horst. Meanwhile Horst has another girlfriend Angelica who is part of a hippie cult led by a Manson-wannabe who calls himself Satahn and who for some reason wants to sacrifice Terry and Horst’s unborn child. Snuff drags on for over an hour with this plot before getting to the final controversial scene which incidentally was added without the knowledge of the original filmmakers.

I am Argentinian…and this movie never could be made in my Country…….cause ..We never have a budget to make movies…..Jajja

This is one of the worst movies I have ever had the displeasure of watching. We are all ten points stupider for having witnessed this atrocious event, and no stars will be awarded. May God help us all.

What the hell this garbage was about? I am confused.

I saw this 20 years ago and thought it was shit then. I just watched it again and it’s still shit now.

I can see that the little faggots are still at it. It never gets old for them. It gives them some sort of a thrill when they are annoying fucking asshole faggots. Here’s the news, you little fucking pussies, and listen very carefully. No one really wants to hear your cheap shit on here. Get lost, you little pre-teen fucking faggots. A bunch of spoon fed millennial pussies that will never grow up. I feel sorry for you, you gay fucking pussies.